Kameangusha BBI! Mixed reactions on a cat roaming at the High Court

• A section of Kenyans are saying that the cat's presence was a bad omen for the BBI, which was declared null and void. 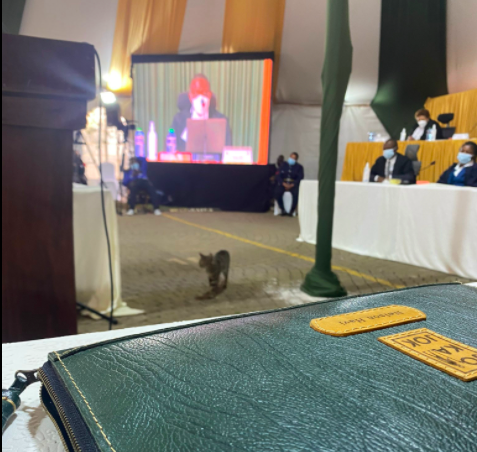 A cat at the court of appeal
Image: Courtesy

Yesterday, all eyes were set on the Court of appeal where 7 judges were to decide whether the famous BBI bill is legal or not.

Judges, lawyers, and other legal practitioners flocked to the supreme court.

But one uninvited guest was a cat with black and brown strips roaming around the court buildings during the hearing.

Now, a section of Kenyans are saying that the cat's presence was a bad omen for the BBI, which was declared null and void.

The non-superstitious ones believe that the cat was minding its own business in the court, and had nothing to do with the stopping of Raggae.

Here are mixed reactions from Kenyans;

@ Lulu- I don't trust people who don't like Cats you don't associate any animal with bad luck or witchcraft unless you're a Member!

@ Alexander - "When Kenyans fail to understand the English spoken in court, seeing cats and other trivial matters is inevitable."

@ Monza - "Kameangusha BBI! The casket is ready! BBI to the grave a cat from Igbo village in Nigeria."

However, this cat is not new to the supreme court environment. It did not only appear during the BBI ruling.

In 2020, the same cat appeared during a press conference by retired CJ David Maraga.

So, this cat just lives around the Supreme court, it has nothing to do with the BBI, and no one dispatched it to stop Raggae.

I did things so that I was way ahead of other people. Be creative, don't whine, don't pull people down, you work on your talent and begin to push it. ...
Politics
11 months ago