He said the lorry's driver fled the scene after the incident

• He was rushed to the Machakos Level 5 Hospital where he was pronounced dead on arrival.

• Machakos County police commander Issa Mohammud said the accident was due to a head on collision on Saturday.

Police in Machakos are investigating an incident where a lawyer died after a speed bike he was riding was hit by a lorry along Machakos - Kangundo road.

Mohammud said the deceased's pillion passenger Elvis Muinde had been admitted at the same hospital in stable condition after he sustained head injuries.

"A driver of a lorry registration number KCE 352M that was moving from Machakos town heading to Kangundo general direction failed to keep his proper lane and crashed with a motorbike at Kamuthanga area," Mohammud told the Star by phone on Sunday.

The motorbike, Mohammud said, was moving towards the opposite direction.

"Both the motorbike's rider and pillion passenger sustained head injuries and were rushed to Machakos Level 5 Hospital where the rider, Mulei, was pronounced dead on arrival. The passenger, Muinde, has been admitted at the hospital where he is undergoing treatment," Mohammud said.

He said the lorry's driver fled the scene after the incident.

"We are in hot pursuit of the driver, we will arrest him for the law to take its course," Mohammud said. 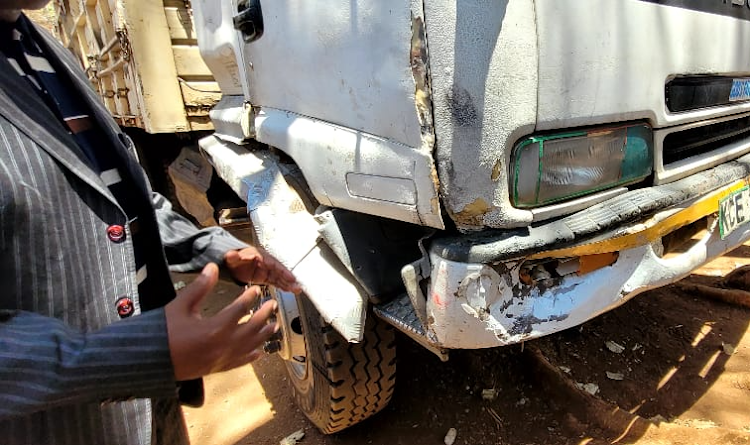 The lorry involved in the incident
Image: The-Star

Mohammud said both wreckages of the vehicle and motorbike were towed to Machakos police station while the body removed to Montezuma Funeral home in Machakos awaiting a post moterm.

The Machakos based lawyer was a managing partner at O.N Makau & Mulei Advocates, a position he held from April 2011 until his demise.

He was an associate advocate at Kang'ethe & Co. Advocates between October 2009 and April 2011 before joining O.N Makau & Mulei Advocates.

The deceased was a legal intern at the Office of the Attorney General between January 2009 and October 2009.

He holds a Diploma in Law from Kenya School of Law, and Bachelor of Law (LLB) degree from the University of Nairobi.

Mulei has left behind a widow and two children.

Aq9ine said that lack of a job led him to start cooking and eating weird food.
Entertainment
6 months ago

Two kids left dead after being hit by a lorry