How Ronaldo's employee crashed one of his luxury sports car

• Football superstar, Cristiano Ronaldo has vowed to pay for damages caused by his Sh 244M Bugatti Veyron car that crashed into a property in Majorca, Spain.

• Ronaldo and his family was using one of the cars when the incident took place. 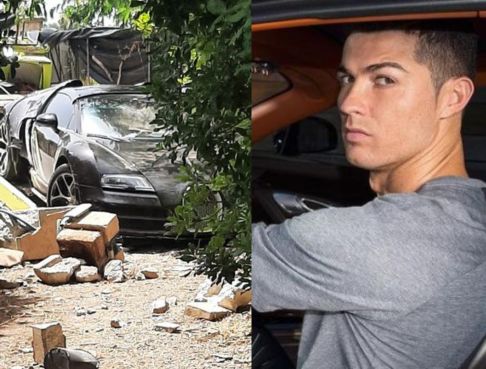 Football superstar, Cristiano Ronaldo has vowed to pay for damages caused by his Sh 244M Bugatti Veyron car that crashed into a property in Majorca, Spain.

It is reported that Ronaldo's employee who is thought to be one of his bodyguards crashed into a stone wall next to a property he has rented, when the Man United star and his family were away.

The bodyguard was driving the luxury sports car before it came off the road and crashed into a wall.

It is believed that no one including the bodyguard suffered significant injuries from the crash. The damaged Bugatti was later taken away on a tow-truck.

According to Mirror.co.uk, Ronaldo, 37, ferried more than two luxury cars to be used during his holiday stay in Majorca. Ronaldo and his family was using one of the cars when the incident took place.

Speaking to Ultima Hora a Majorcan news outlet, the homeowner who's property was damaged revealed that Ronaldo had vowed to pay for all the damages the car caused.

"I had to wait for a while for the door to be opened [when I visited Ronaldo] but I was met by a very polite man and woman. On behalf of Ronaldo they promised to pay all the damage the Bugatti had caused." Said the home owner.

Ronaldo who rejoined Manchester United last summer for a second stint, jetted to Majorca with his wife Georgina Rodriguez and their five children on June 14.

The legendary forward is said to be renting a luxury home close to the Tramuntana Mountains where he is enjoying some time off football on his super yacht.

Cristiano Ronaldo announces the death of his son

Cristiano Ronald has had a huge impact on and off the pitch since his Manchester United comeback, and his teammates haven't been eating desserts ...
Entertainment
6 months ago