• Abraham Mwangi's wives stunned Kenyans last week when they revealed that they were leaving in the same home.

• Abraham has gotten 4 kids with his two co-wives who get along well. 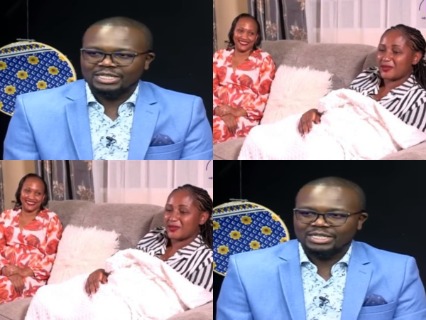 Abraham Mwangi, 35 has opened up on how he is successfully living together with his two wives in Juja.

Serah Wachira,35 is the first wife while Maureen Njeri 33 is the second wife. The couple has 4 kids between them.

Speaking during an interview with NTV, Abraham said, “Maureen and I met in 2008 as professional colleagues and in 2014 is when we started dating. Sometimes Serah would see me being called by Maureen and I would tell her to pick up the phone. Serah knew Maureen but at the time we were just friends.”

Abraham says his relationship with Maureen blossomed after he disagreed with his first wife.

“I remember me and Sarah disagreed. I would get home late sometimes, I would call Maureen so that we could do coffee. In the process, the friendship blossomed into an affair. I found myself in a very confusing situation as Maureen was now pregnant. That was in 2019.”

Grace says she thought Abraham and Maureen were just friends.

“I thought they were friends until one day my son told me to see ‘toto.’ I saw the photo and then I started connecting the dots. That is when I found out they were lovers. He was not home at the time, and after a few days is when I asked him about it. He never denied it. I told him I wanted to know Maureen.”

Maureen says, “I was afraid at first but having been friends it wasn’t hard for us. What has kept us together is that we have good communication.”

Maureen added that for her to agree to be a second wife she had to consult Serah. Abraham says he has no schedule on how to live with his wives.

“We have a five-bedroomed house so everyone has their privacy. I also have my room. I have no schedule, some days I come home late but I know how to balance to ensure the two are happy. In my family, no one has two wives.”

Serah is an interior designer, and Abraham is a computer engineer who doubles up as a data specialist. Maureen works with Abraham in his companies.

"Ladies should share, let there be peace." - Oga Obinna
Entertainment
2 months ago