The two women describe how unreal their first encounter was

• Their husband Abraham planned the first meeting much to the amusement of the first wife.

• The co-wives Serah and Maureen get along very well. 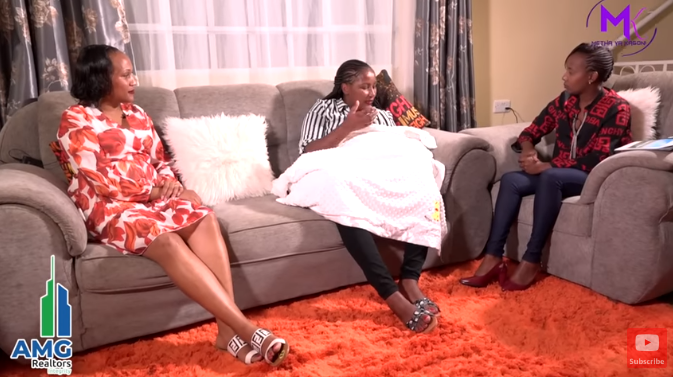 Kumbe polygamy can work so flawlessly as a family called the Abrahams are proving as the two wives live in the same house.

In a YouTube interview with Monica Gathoni on the Metha ya Kagoni, the women revealed how their journey started.

Serah and Maureen have lived together with their husband Abraham for a year and a half. The two are not only married to one man but they also live in the same house.

The two women say that they reached this decision (without the influence of their husband) to allow their kids to bond and also to nurture their friendship as co-wives.

They cook, and they don't get jealous of his attention to the other woman.

The first wife explains their encounter and how the man planned for them a surprise encounter to introduce them to each other.

Maureen said, "He was on phone talking funny and he lied that he was alone in the car then I demanded open the gate to my home. I saw Sarah and he was smiling a lot in the car and I saw Sarah. She greeted me, hugged me, and smiled at me."

Abraham went ahead and introduced them then said, "So what do you want now?" The ladies are speaking out showing others how to embrace each other as ladies even if you're married to one man.

Serah is the first wife and has been with Abraham for 8 years. They have 3 kids.

Maureen is the second wife. She met Abraham at her workplace where he was a client before their relationship became deeper.

Maureen said, "At first, I did not know he was married because it was purely business. He then started asking me to go out with him until one time we started going a lot. He never told me he was married but I came to find out later, I asked him but he denied it, but after confronting me he accepted he was married and she was pregnant."

"I asked him why and he said will he tell his wife, so I withdrew but not completely because we were doing business. His wife gave birth and I saw his status, and I asked him who the child was. We stayed apart for some time then much later he confessed this was his baby. I told him we break up, but then we got back together again. At this point, I would tell him to spend time with his wife at home. I also got pregnant."

Serah told about his suspicion that she suspected he was cheating when she saw a caller Id called 'Maureen accessory'.

Serah confronted him and he denied saying that Maureen was just a business associate but she wasn't satisfied with that answer.

"I took the phone and saw her pictures. There were even pictures of a child. I  decided to do more investigation before confronting him. The following day I went to the clinic for the second-born I was pregnant, and on the way, I asked him who is Maureen? He shook with fear, and he told me they have a kid. He never denied it, and I couldn't believe it. He noticed I was upset and shaking, and he decided to spend the day with me. He was scared because I was pregnant. you know when you are pregnant, one can get sick. . That revelation shocked and affected me so much. especially now that there is a child involved. it told me he was in a serious relationship."

At this time, Serah became very curious about Maureen and even wanted to meet her for lunch, something the second wife was o.k with.

They first talked when Maureen called to tell Abraham that their son was sick.

"I called her instead. I had been trying to call Abraham and tell him our child is sick, so she picked up the phone and said,  'Maureen finally.' I called Abrahams's phone to get money to take our sick child to the hospital. When Sarah picked up I told her I want to talk to Abraham. We never talked about anything else. "

Their first physical encounter happened when Abraham took Serah along to Maureen's home and told them they are co-wives.

Serah admitted that Abraham had always told her about his desire to get a second wife.

"I remember how when we used to date he would tell me he will get married to a second wife. So all along I was prepared and that's why I wasn't so affected when I found out about Maureen."

The co-wives also said that they decided to move in together when Abraham declared that would only drive to one home where they would all spend the night together.

'No man will turn down a chance to cheat!' - Oga Obinna

"That is why you find some men sleeping with their house helps." - Oga Obinna
Entertainment
2 months ago

On separating from Sarah, Simon Kabu downplayed the claims saying he would "never" cheat on her, "I'm happily married."
Entertainment
2 months ago
WATCH: For the latest videos on entertainment stories