Making your worker wear uniform outside your home is demeaning 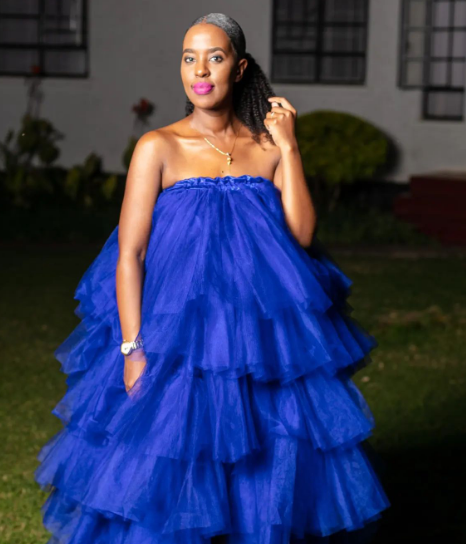 Lilian has also been adding her voice to the political events as the country builds up momentum for the 2022 General Election.

On her social media handle, Lilian also doesn't shy away from weighing in on other people's lives. On Sunday, May 22nd, Lilian penned her thoughts on what many of us notice but don't say.

She appeared to be on an outing and noticed that someone had a domestic worker wearing a uniform in public.

"I find it demeaning and wrong having the house help wear her work uniform out in restaurants, malls, etc." 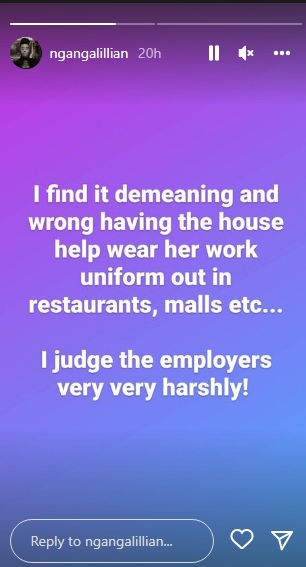 Lilian and her ex Alfred Mutua were recently in the news over the illegal transfer of her shares for a hotel they jointly owned.

Ng’ang’a had complained to the registrar of companies that following their separation, the governor had allegedly reallocated some 1800 shares she owned at Ndash enterprises, which own the hotel located in Machakos.

Ng’ang’a’s lawyer Philip Murgor said the registrar found merit in the complaint dated November 11 last year “and has reversed the entry in the company and the fraudulent transfer of the 1800 shares".

The updated hotel ownership details at the registrar now indicate that both Mutua and Lilian own 2000 shares each.

The governor and his former lover hit headlines last year when they both announced through social media that they were parting ways.

Nga'ng'a would shortly announce her love relationship with musician Juliani.

The relationship was exposed by their friend Boniface Mwangi, who continuously told the public about their cute romance.

The reveal of this relationship elicited a lot of drama with the former exes taking shots at each other as Juliani found himself caught in between.

Lilian and Juliani eventually got married in a secret ceremony and her pregnancy news was revealed.

Corazon Kwamboka has two kids, a son and a daughter she sired with Frankie JustGymIt.
Entertainment
1 month ago

Actor Omosh then introduced himself and admitted that he is a sinner who wanted God to forgive him.
Entertainment
1 month ago

Omosh has had enough of Andrew Kibe's relentless attacks on him
Entertainment
1 month ago
WATCH: For the latest videos on entertainment stories