Kwale woman's husband abandoned her after she got severe burns

Her hands, abdomen, legs, and thighs were severely burnt. The legs cannot stretch.

• Immediately after the incident, Kiarie’s husband abandoned her. She said it could be because she had lost her beauty.

• She said also her relatives and friends abandoned her. The close relatives who used to offer assistance also got tired midway and let her survive on her own. 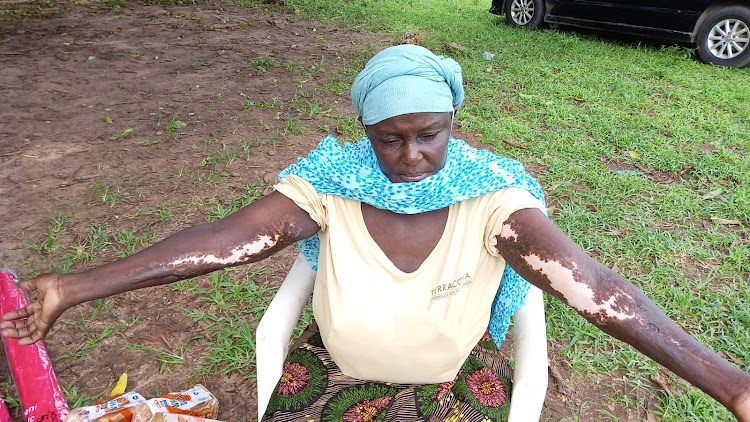 Teresia Waithera Kiarie showing the scars she was left with after getting burnt
Image: Shaban Omar

Teresia Waithera Kiarie woke up in the middle of the night to find herself  choking in heavy smoke from a huge inferno that was fast consuming her house.

Waithera, a 35-year-old mother of four, survived with severe burns.

That was seven years ago, but the incident that turned her life upside down in Kinondo, Kwale county,  is still fresh in her mind.

Waithera narrated how she braved the inferno that night to save her children who were asleep.

“I do not remember the exact time the fire broke out, but I woke up to find our house ablaze. I braved the fierce fire to save my children and after that, I cannot remember anything else,” she said.

“I lost consciousness and the last thing I remember I found myself nursing serious injuries on a hospital bed.”

She said it was by God’s grace that she is still alive. Her firstborn child was then 14 and the last born only seven.

She said the cause of the fire was not established immediately, but they suspect either a gas cylinder or electric fault.

After the fire incident, the young mother was admitted to hospital for three years to completely recover from the severe burns.

Her hands, abdomen, legs, and thighs were severely burnt. The legs cannot stretch. Their house, once a stunning modern building, was razed down completely.

Immediately after the incident, Waithera’s husband abandoned her. She said it could be because she had lost her beauty.

“He would occasionally visit me in the hospital before he disappeared completely,” she said. 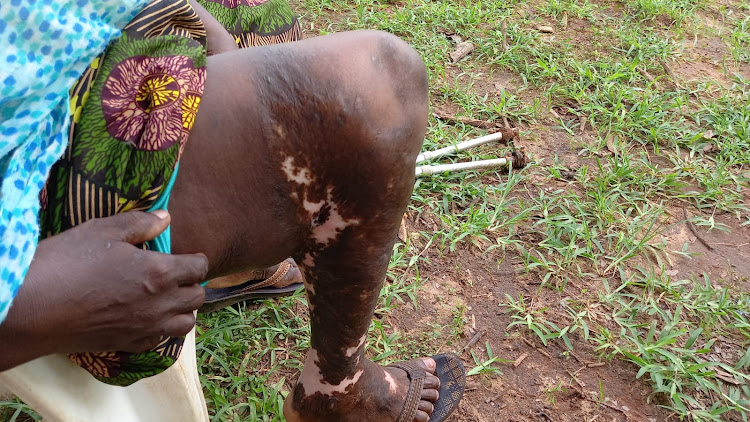 Teresia Waithera showing the scars she was left with after getting burnt
Image: Shaban Omar

She said her relatives and friends abandoned her. The close relatives who used to offer assistance got tired midway and let her survive on her own.

“I was all alone, but my children gave me hope to continue living. Most of the people had already abandoned me,” she said.

Because of the severe burns on her legs, Kiarie cannot walk freely. The fire also affected her eyes and her vision became very poor. She struggles to see at night.

The deep scars keep reminding her of that dreadful night.

At hospital, Waithera was unable to get advanced treatment because of a lack of enough money.

She was first admitted to a private hospital in Diani, but due to the bill that was fast accumulating, she had to be transferred to Msambweni County Referral Hospital.

A foreigner who resides in Ukunda offered to assist her in settling the bill at the private facility before she was transferred.

Later on, she became deserted again. Her 36 months in the hospital is “something I cannot wish for any person,” she says.

"I have seen people dying in my presence and each day I thought I would be next. I kept my fingers crossed throughout, asking God to spare me," she said.

Starting from scratch immediately after being discharged, Waithera somehow managed to get back on her feet.

With four children to look after, she had no choice but to keep her head high and face whatever challenges that came.

"When I was released from hospital, things were different. I had nowhere to go, but to devise new ways of survival to fend for the family," she said.

With her steel crutches, she moved from one office to another with the hope of getting help but to no avail.

Kiarie said many people branded her as a troublesome woman, a life that thousands of other persons living with disability have to endure every day.

Since then she has been surviving through charity from churches and women's welfare groups, but the assistance has never been enough to solve all of her problems.

Often she would lose hope, but the scars on her body reminded her of the need to keep pushing. She tried many businesses to give her children a better life and education.

Unfortunately, some of the children had to drop out of school. At the moment two are in classes eight and five. One of her sons is a boda boda operator in Msambweni.

Waithera runs a small business selling paraffin and locally made detergents in Kinondo, true to the spirit of the adage disability is not inability.

The small business has restored her dignity and neighbours know her as a superwoman.

Although she gets very little, she believes it is better rather than being on the streets begging.

She was doing her business in the open until last week when she received a parasol (umbrella) from the Coalition on Violence against Women.

Waithera is calling on well-wishers to help her children complete school.

"I ask for your help so that I can have a better business and maybe help my children get an education," she said.

'Life returned to zero after our house burned down' - Yassin Comedy

Eid miracle: Photos of Guardian bus that bursts into flames

45 passengers travelling in a Guardian Angel bus witnessed a labour day miracle when they all escaped unhurt after it burst into flames.
Crime
2 months ago
WATCH: For the latest videos on entertainment stories