• She was last seen wearing a black hoodie and matching trousers around the Mount Kenya area of the Kiambu County neighbourhood.

Maureen Wangui Kioi , a 12-year-old girl who had gone missing in Githurai has been found dead.

Maureen, a pupil at Githurai 45’s Juter Academy, was last seen wearing a black hoodie and matching trousers around the Mount Kenya area of the Kiambu County neighbourhood.

According to reports from Missing Child Kenya, the body of Maureen Wangui Kioi, who was first reported missing on April 20, 2022, at Githurai Mwiki police station, was discovered on May 1.

They sent their condolences to the family asking anyone with information that might help unravel the death to come forward.

"It is with great sadness that we announce that Maureen Wangui Kioi was confirmed as found deceased on May 1, 2022. 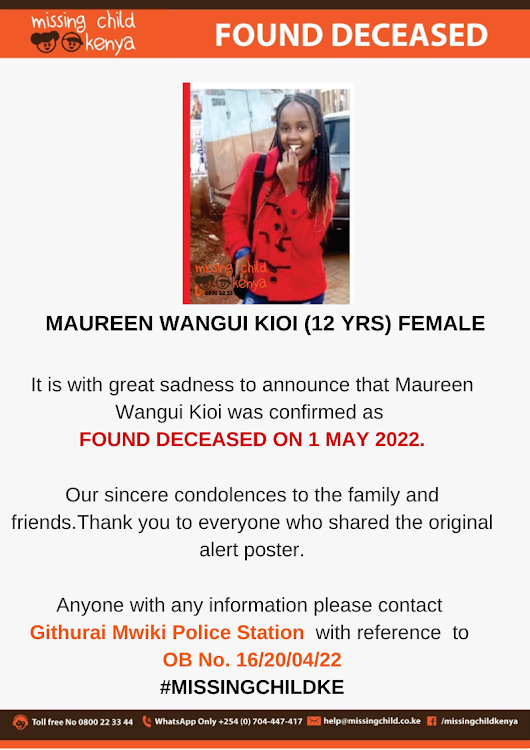 Investigations into the incident are currently ongoing.

Their missing had been reported at Ngarariga Police Station.

"It is with great sadness to announce that John Njenga Gathirimu and Kevin Kariuki Mwaura were confirmed as FOUND DECEASED ON 5 AUGUST 2020.

Our sincere condolences to their family and friends.Thank you to everyone who shared the original alert poster.

Anyone with any information please contact Ngarariga Police Station with reference to OB 07/26/07/2020.#MISSINGCHILDKE" 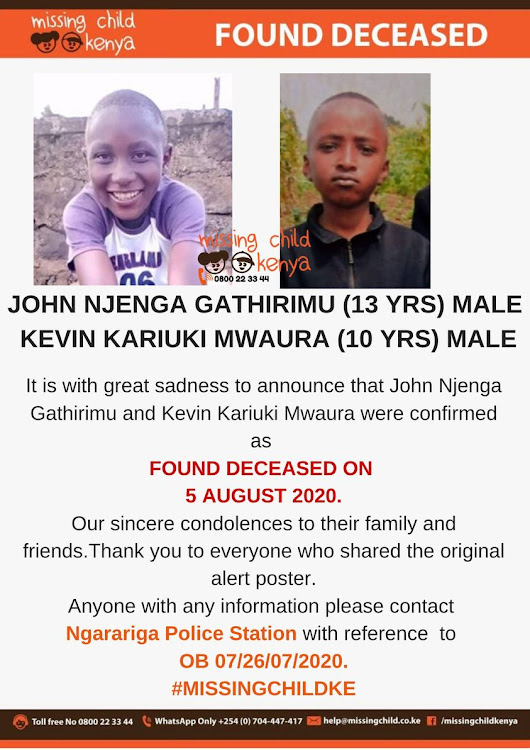 John Njenga and Kevin Kariuki the two were discovered dead in August 2022 after they went missing
Image: Missing Child Kenya

5 dead and 12 missing as government officials ambushed in Marsabit

The car had eight bullet holes and the number plates had been removed.
Crime
2 months ago

Joshua Bosire was battling depression.
Crime
4 months ago
WATCH: For the latest videos on entertainment stories