• Karangu has explained the major negative impact of cyberbullying on his life.

• He says that backlash directed at him caused his mum to get high blood pressure. 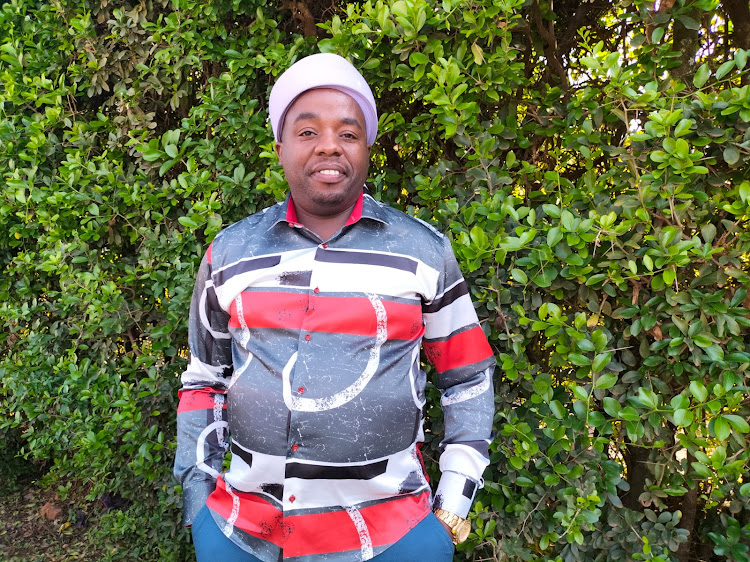 However, the same platforms caused his mum's health to deteriorate.

In an interview with the Star, 'Mr Wonderful', as he is fondly referred to, said backlash directed at him caused his mum to get high blood pressure.

The popular influencer explained the major negative impact of cyberbullying on his life.

"My mother was not sick until people started posting fake stories about me being arrested. Others saying I was cheating in my marriage," he said, adding that he was a target of cyberbullying in 2022.

Karangu was born and raised in, Mathioya, Kagio-ini, Murang'a county.

He came from a humble beginning and partly went to a charity school since his parents could not afford to pay for his secondary school fees.

"I used to pay 800 bob, but even that, my dad could not manage, and so I quit school," he said, adding that he started working in a construction site in Eastleigh for two years.

Being the fifth born in a family of 10 children, Karangu says going back home would not have made a difference.

"Those who were ahead of me had not gone to school and I wanted to break the idea that in my home, we do not go beyond Class 8."

He went back to school after two years of working in a 'mjengo' and paid his school fees. He was promoted to Form 3 just to be in a class that had his agemates.

"I scored a D+ and came back to start life again in Nairobi. My dad paid rent for two months and told me to build myself."

At the time, Karangu said he thought his dad was harsh but to date, he says he appreciates the humble beginning.

"I started selling mutura in Kayole and after getting my small savings, I went back home and started a cosmetic shop."

Just when he wanted to marry in 2010, he was bankrupt after his shop closed down.

He says the lack of a good foundation in school has cost him and he is, therefore, looking forward to going back to school.

"I think I would be on a different path had I gone to school, but I am also working very hard to see to it that my children go to the best school," he said.

In his church, Karangu explains that he was given a search permit to look for a wife.

"You do not just start looking for a woman everywhere. Our dating is different, there was a time people dreamt about your spouses, but that no longer happens, although those marriages worked perfectly," he said.

"The disadvantage is that sometimes, they would connect you to someone you do not love or who is even older."

About the search permit, a man walks around with the letter until he gets a woman to approach.

"You had all the rights. If she agrees, she would sign the letter and then you go back to the church and they pray for you. The church would then analyse if you are serious about settling down."

The first time, Karangu said he met a woman who was not in the Akorino religion, and the church refused for him to marry her.

It was in his second trial that he met Triza, whom he married at a church wedding in 2011. He credits her for his successful family.

He said between 2011 and 2014, he fell into depression and his marriage almost hit the rocks after he got a child out of wedlock.

Karangu is currently one of the most-followed celebrities on Facebook. He shot into the limelight after singing about BBI.

In 2020, Karangu told Word Is they were representing the Akorino fraternity in matters concerning the country.

The song talked about developments that had been done by retired President Uhuru Kenyatta and the peace achieved after the handshake between him and Azimio leader Raila Odinga.

After the song was released, Karangu received a massive backlash from followers on social media. Many were against the song, saying they are misleading Kenyans by supporting BBI.

Despite the hate and trolls at the time, he got a platform, and that is how he concentrated on doing charity.

"My Facebook page is used by all Kenyans to highlight problems and find solutions for our people."

In the three years since he started, Karangu says he has helped more than 1,000 needy people in Kenya through his platform.

"I have children in university through my platform, and many others have gotten homes and even received medical assistance," he said.

His greatest motivation is when he sees people succeeding through him.

"I always major in the major things. When I was struggling, nobody would expose me or even troll me," he said.

"The same social media has made me a brand ambassador to more than 100 brands. I would say since God has put me on the top, then I am ready to be a topic."

He says the worst thing that has ever been said about his charity is when some of his followers accused him of being a devil worshiper.

"I once helped three children who had been sick but unfortunately, they all died, and people claimed I was sacrificing their lives."

In February last year, he was also on the spot following reports he has been using online fundraisers to enrich himself.

On Friday morning but she wrote to the committee requesting a postponement of the hearing.
News
1 month ago

'No wife should be undermined!' Stephen Letoo warns Samidoh

He also denied claims that he sold his car and drunk all the money.
Entertainment
1 month ago