'It is not easy..' Wahu talks about the challenges of raising a teenage daughter

Wahu is a mother of three daughters, Tumiso, Nyakio and Shiro

• Wahu and her daughter Tumiso have candid talks about life

• Wahu said her daughter talks about boys with her parents 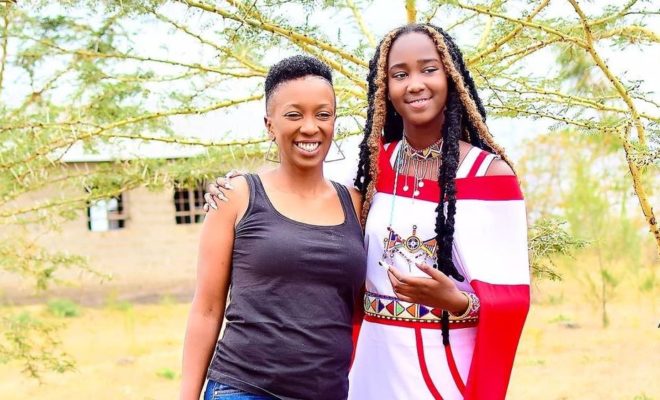 Singer Wahu has talked about how life is raising her teenage daughter Tumiso.

Speaking to Mpasho's writer, Elizabeth Ngigi, the mother of three described raising her 16-year-old daughter as an adventure.

"It is different and it has got its own challenges and excitement," she said adding that she and Tumiso now have open conversations about life.

Wahu described raising her daughter as a friend saying it has made her become open in everything she is going through in her life.

"Sometimes I am like is this good to tell her? We have our moments of disagreements coz she will try to push a boundary or two but is exciting," she said.

Wahu said she is also learning to let go that Tumiso is no longer a baby which is a challenge in her head.

"Like durning the pregnancy, she would want to go to prenatal clinics with me but I appreciate that and it is all about adjusting," she said.

On relationships, Wahu said Tumiso tells her when a boy wants to take her on a date.

"There are times she comes and says there is a boy who is asking me on a date and I am like, I don't know how I feel I wanna say yes, and she is like, we are just going to have ice cream and I come and I am like, fine, but it is not easy," she said.

Wahu said as a couple, Nameless also plays a big role in their daughter's life since she is also very open to him.

"She talks so much about boys with her dad and he gives her a guy's perspective since he is not the kind of a man who will intimidate boys and things like that which is very important," Wahu said.

Even when she is heartbroken or excited, Tumiso will share that with her parents.

"My advice to any parent raising a teenager is that, it is part of growing up and whether you like it or not, they will have relationships. It is a matter of do they tell you or not."

I had given up on ever having more kids-Wahu discloses

Wahu told women above 40 and looking for a child is that they should not lose hope.
Exclusives
1 month ago

Wahu reveals deep fear she had getting pregnant at 40

Talented musician Wahu Kagwi is enjoying motherhood for the third time, something that she is very grateful about.
Exclusives
1 month ago
WATCH: For the latest videos on entertainment stories

Wahu speaks on whether she would ever want a son