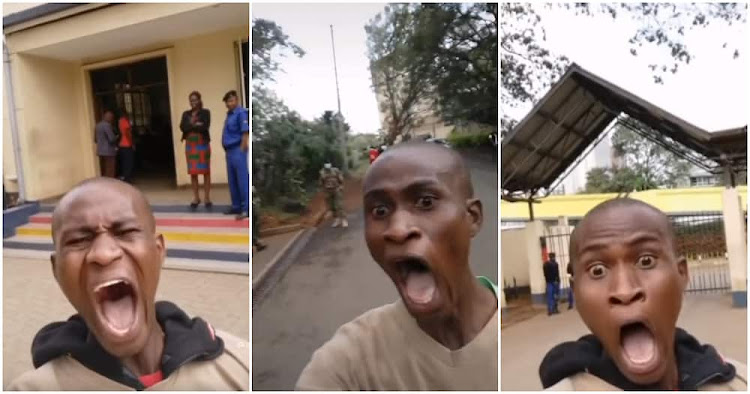 Nduru Man, the Tiktoker who trended after screaming President Uhuru's name outside the State House has taken a break.

The internet sensation was on Wednesday arrested again after screaming at DP Ruto's residence in Karen.

Speaking to Mpasho, Nduru Man said he had to cry for mercy so that Ruto's security people could not beat him.

"I was in Karen to do some deliveries there, and I asked about where the DP residence is. I decided to create my content outside his posh and well-guarded residence," he said.

"I was arrested and taken to Karen police station where I spent for the better part of the day on Wednesday."

Nduru Man said in the cell, that some cops recognised him and was even given some special treatment.

"I was denied access to my phone until 6:00 pm. I have the video and it is not something bad and I did not provoke anyone so I will use it."

Asked if he will do such content again, Nduru man said life is full of risks.

"I am on a water break since I don't want more trouble with cops."

He was nabbed two weeks ago for doing comedy outside the State House.

A while back he was also at the Mpasho offices where he pranked the writers who were shocked when he started screaming in the middle of the newsroom.

Watch: Tiktoker who screamed at State House recounts the experience

Nduru Man also opened up on how his baby mama left him for a richer man in Dubai and was left to raise the newborn alone.
Exclusives
4 months ago

'My mom thinks I am a businessman,' TikTok dancer Flirty Carlos
Exclusives
5 months ago
WATCH: For the latest videos on entertainment stories