Finally at rest: Miner, whose body was retrieved eight months after mine accident buried

Piece by: KNA by Brian Ondeng

• The deceased mother tearfully narrated the tribulations the family underwent during the last eight months, with many people branding them names and blaming them for both the death of their son and the inability for searchers to find his remains. 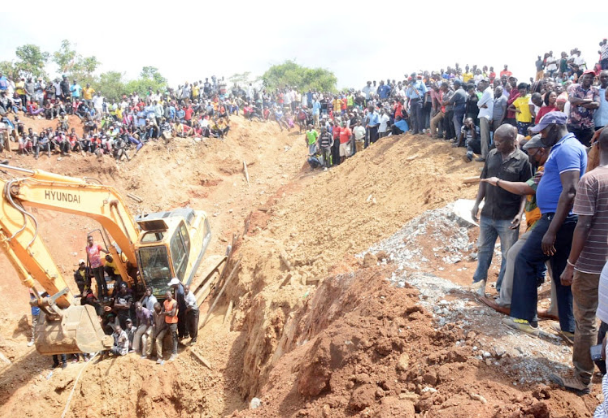 The body of Tom of Okwach, one of the victims of gold mine accident, buried alive at Abimbo mines in Bondo sub county in December last year, has finally been laid to rest.

Okwach remains, retrieved early this month from the mines after eight months of search was buried Wednesday at his home in the same village of Abimbo.

On 2nd December last year, eight miners including Okwach were trapped inside a 500-foot-deep shaft after the mine collapsed while they were inside, burying them alive for days.

Following rescue missions conducted by teams from both national and county governments, six people of them rescued alive, while one miner was found dead after one week of frantic excavation.

The rescue mission by both levels of government was stopped after two weeks of search after it was deemed that the remaining miner, Okwach, could have been dead.

But because of Luo customs and beliefs the family of Okwach could not abandon their kin and had to camp at the site for more than 7 months, employing manual diggers to search for the body, which eventually bore fruits.

Members of the public from different parts of Siaya county thronged the funeral service to witness the sendoff of the trapped miner, who made headlines for months while buried for more than 500-foot underground.

Okwach's parents who eulogized their son as a hardworking man who was dedicated to provide for his family, disclosed how relatives and friends pressurized them to give up the search and instead burry a banana plant stalk in line with Luo traditions, but they insisted on waiting for the body of their son to be found.

The deceased mother tearfully narrated the tribulations the family underwent during the last eight months, with many people branding them names and blaming them for both the death of their son and the inability for searchers to find his remains.

They however expressed gratitude to relatives and friends and the local administration who stood by them during their difficult moment.

Okwach’s widow, Jacklyne Okwach,23, narrated how the father of her two children left the house on the fateful day, only to be brought back home for burial eight months later.

She said that she was glad to bury her husband in his home and to put behind the tribulations of long search for the body of her life partner, which may have otherwise disappeared forever.

Political leaders led by South Sakwa Ward aspirant Eunice Ndolo asked both the county and national government to invest more in disaster preparedness and to support artisanal miners in the region on issues of safety to avert similar untimely deaths.

Sharon passed away barely two years after their wedding during child birth.
Lifestyle
4 months ago

Maina Olwenya succumbed to hypertrophic cardiomyopathy, a disease in which the heart muscle becomes thickened, making it harder for the heart to pump ...
Exclusives
4 months ago
WATCH: For the latest videos on entertainment stories