Mad or muddy man? Get to know musician Embarambamba

Embarambamba was rocked with a scandal in 2021.

• A less known gospel artist from Kisii became the concern of Kenyans over his unique way of praising God; through jumping on trees, animals, and rolling inside muddy waters. 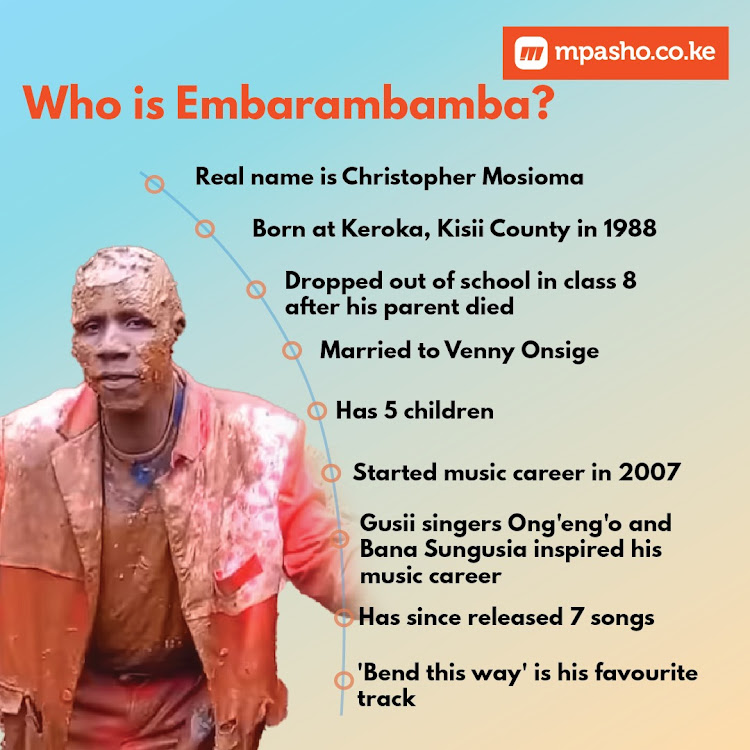 Facts about Embarambamba; the man who sings well inside mud.
Image: Trevor Obade

Christopher Mosioma, known for his stage name Embarambamba became a media sensation in 2021.

A less known gospel artist from Kisii became the concern of Kenyans over his unique way of praising God; through jumping on trees, animals, and rolling inside muddy waters.

Some thought he was mad, and recommended that he gets some help.

At the high moment of his career, the singer would have a media tour across top media houses in Kenya.

It is at this time that Embarambamba was met with his first scandal.

A video of him dancing in an 'ungodly' manner at a nightclub went viral, leading to all manner of criticism directed towards him.

This would then send Embarambamba out of the media gaze for some time. Until recently, when he bounced back with a tribute song for former President Mwai Kibaki.

Embarambamba's 'muddy' effect has gotten the attention of Tanzanian star Harmonize. He is impressed by the singer's uniqueness and has revealed plans to do a collabo with him.

Harmonize reveals plans to do a collabo with Embarambamba

Harmonize is impressed by Embarambamba's uniqueness
Entertainment
3 weeks ago

"I thought he was a comedian and wondered what people found funny about him throwing himself in the mud." - Maina Kageni
Entertainment
4 months ago
WATCH: For the latest videos on entertainment stories