Piece by: AFP By Andrew MARSZAL 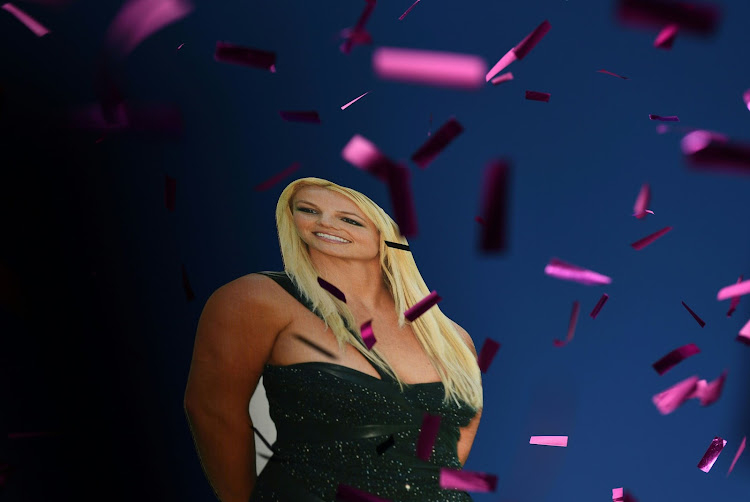 Supporters of the FreeBritney movement hold a Britney Spears'lifesize cardboard cutout as they celebrate a court decision ending her conservatorship outside the Stanley Mosk courthouse in Los Angeles, California on November 12, 2021.
Image: Patrick T. FALLON / AFP

A Los Angeles judge Friday terminated the controversial guardianship that has controlled pop star Britney Spears' life for the past 13 years, handing back her freedom along with control of a multi-million-dollar estate.

The ruling, greeted with raucous cheers and showers of pink confetti by Spears' fans outside the downtown courthouse, ends a conservatorship long overseen by her father, and which the "Toxic" singer has described as abusive.

"Best day ever... praise the Lord... can I get an Amen," wrote Spears on Instagram, using the hashtag "#FreedBritney."

"I can't freaking believe it!" she added.

The formal end to the guardianship comes after the pop princess's father Jamie Spears was removed from his position in charge of her finances and estate at a hearing in September.

Both sides reiterated their support for swiftly ending the guardianship at the start of Friday's brief hearing.

"Effective today... the conservatorship of the person and estate of Britney Jean Spears is hereby terminated. And that is the order of the court," said Judge Brenda Penny.

Friday's hearing capped a long campaign by Spears and her legion of global fans to end a conservatorship that began after her highly public 2007 breakdown when the star attacked a paparazzo's car at a gas station.

Judge Penny agreed with Spears' request for the arrangement to end without the need for a mental evaluation -- on the basis that "this was a voluntary conservatorship" and that "all parties agree."

"The court finds and determines that the conservatorship of the person and estate of Britney Jean Spears is no longer required," she ruled.

Charles' foundation, which helps jobless people get back into work and start small businesses, said in September it took the newspaper reports "very ...
Exclusives
2 weeks ago

Fans outside the courthouse who had been campaigning for the conservatorship to end for years could hardly contain their joy and relief.

"She thought nobody would believe her... she's just a perfectly capable human being," said Danielle Kushner, 30.

"We all feel like she's our friend, we wanted to talk to her but couldn't talk to her!"

Spears, who publicly spoke out via phone to the court this summer,  had said through her lawyers that her father was "never fit to serve."

She cited in one petition allegations of his "reported alcoholism" and "trauma he caused his daughter since her childhood."

As momentum mounted, Spears said in a September filing that she wanted to end the guardianship as soon as possible so that she can marry her fiance Sam Asghari with a prenuptial agreement.

Spears, who has two children with her former husband, the rapper Kevin Federline, has previously alleged in court that she was prevented by her father from having a contraceptive IUD removed, despite wanting more children. Jamie Spears denied the allegation.

"I really want what she wants, what Britney wants.... she wants to have kids, she wants to get married. Whatever she wants to do, 100 percent support," said fan Gloria Amaya after the ruling.

Kiss100 presenter, Jalang'o has decided to speak about the whole kerfuffle between Tanasha Donna and Risper Faith. And as is his norm he cracked ...
Entertainment
2 weeks ago

In dissolving the conservatorship, Judge Penny agreed to a caveat by which John Zabel -- the accountant chosen by Spears' lawyers to replace her father -- is granted by the court additional powers to manage her estate on her behalf.

Spears' estate is estimated to be worth $60 million, according to US media.

The professional conservator Jodie Montgomery was declared no longer responsible for decisions concerning Spears' person, although her lawyer told the judge she would continue to "be there" for "anything Miss Spears needs."

Spears did not address the court Friday via telephone as she did earlier this summer, although her mother and father both dialed in.

Supporters organized a "Termination Rally" Friday, with a "Freedom Party" to follow across town in West Hollywood.

"I'm so happy, I'm ecstatic. It's magical, exciting... she's been in this horrible circumstance for so many years," said Spears fan Neal Wolf, 32.

"It's just like 'Finally!' We've been fighting for so long."

Spears' lawyer Mathew Rosengart had his name chanted as he addressed the crowd of supporters, among whom he has attained celebrity status.

"What's next for Britney -- and this is the first time that this could be said for about a decade -- is up to one person: Britney," he said.