'Naumwa!' Musician Ringtone arrives in court on an ambulance

• Lying on a stretcher inside the ambulance, Ringtone was still receiving medical attention from medical practitioners as he headed to court. 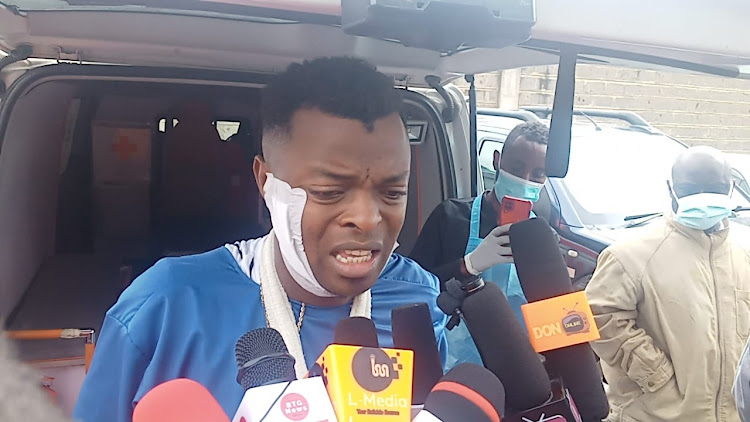 On Thursday morning, Ringtone arrived at the Kibera Law courts aboard an ambulance for a mention of the case.

Lying on a stretcher inside the ambulance, Ringtone was still receiving medical attention from medical practitioners as he headed to court.

"Mimi naumwa(I am in pain) my body is not OK. I was not ill and I did not wrong Robert Alai. But he just decided to attack me," Ringtone Apoko said.

However, the case failed to kick off today since the DPP recalled the file.

Addressing the press at the Kibera Law Courts, Ringtone said that he wants justice served so as to prevent other motorists from suffering the same fate.

"I want to tell the Inspector General of Police that Kenya is a country that is guarded by law. If tomorrow I attack someone, let the law be applied. I don't understand why my case is stalling. I want to tell Kenyans not to lose hope. I still believe Kenya is a law-abiding country," he said.

Since the alleged attack on July 23, Ringtone has been complaining of body aches.

Mungu wape nguvu! Photos of Caroline Kangogo's children and parents at her burial

Caroline Kangogo's father, Barnabas and mother Leah led mourners to collect the body ahead of burial.
Exclusives
1 month ago