The Nitongoze video has so far accumulated over 870K views on YouTube within three days. 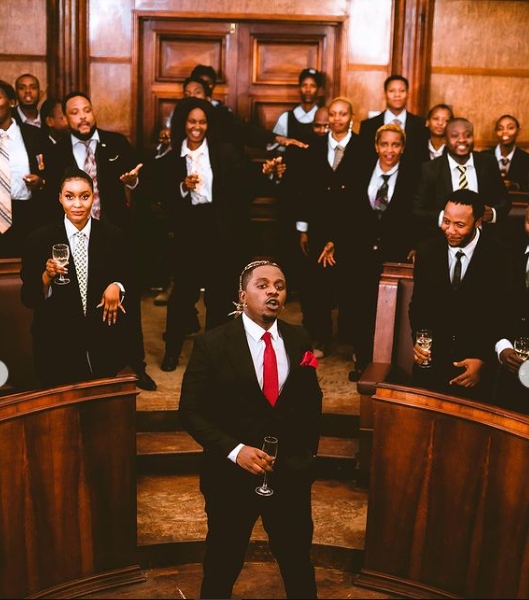 Singer Rayavnny has dubbed his latest video Nitongoze, 'the most expensive video' he has ever done.

The video featuring Diamond Platnumz is estimated to have cost him Tsh500 million (Ksh26 593 923.47) - if his statement is anything to go by.

According to Vanny Boy, he hired more than 200 actors who were dressed in black suits for the Nitongoze video.

The singer released the song a few days ago and has been sharing behind the scenes of making the video.

The aesthetic in the video tells us why he used so much money. The black suits are paired with white shirts and different color ties.

There are also women in the cast who wear the same black suits.

In a conversation with his director, Rayvanny discloses that he was very willing to part with Tsh40,000,000 (Ksh2127513) to create the vision he had in mind for the music video.

Here is how the conversation went down:

#IVAN DIRECTOR has been found. #RAYVANNY: Everyone wears a suit.

#IVAN: Guys say One Suit\nTwo hundred thousand, is it possible???\n

Rayvanny makes it clear they are not rented suits, but what he bought.

His fans are wondering what the singer will do with the suits now that the video is out.

The Nitongoze video has so far accumulated over 870K views on YouTube within three days.

Away from the video, Rayvanny and Harmonize have been beefing recently with the two trading bars about who inspires the other more.

Harmonize sarcastically promised to teach Rayvanny how to make money because Vanny Boy has not been up to his standards.

Rayvanny shot back at him saying it was because of the bhang abuse that he was talking ‘carelessly.’

Harmonize has made his HIV status public after taking the test - for the second time.
Entertainment
4 days ago

Diamond Platnumz’s manager Babu Tale has weighed in after singer Nandy signed her first artiste under her record label – The African princess label.
Entertainment
5 days ago