MCA Tricky brags about having a 'Mzungu' father-in-law

Tricky said he is very happy for her just that he wished Akothee will sustain the relationship.

• The comedian wished Akothee with sustain the relationship. 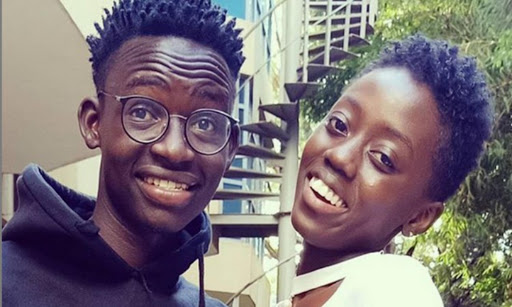 Comedian MCA Tricky is praying for his alleged mother-in-law Akothee to sustain her relationship with her new Mzungu bae.

Tricky, a well-known Churchill show comedian-cum-radio host has for long been rumoured to be dating Akothee's daughter Rue Baby.

Speaking in a recent video with online media, Tricky was asked how he felt about Akothee having a Mzungu lover.

Tricky said he is very happy for her just that he wished Akothee will sustain the relationship.

"I have a white father-in-law. Akothee is dating a white guy and I am happy about her," he said.

"We are doing good as a family. My father-in-law is also doing good. I am really praying that their love stays forever. If they break up, unga itapungua kwa nyumba. In case Akothee is uncontrollable please ask for advice from me Mr. Omondi."

A few months ago, the comedian made a bold statement claiming he was planning to impregnate Akothee's daughter, Rue Baby.

Speaking on SpmBuzz, Tricky said he was tired of being asked whether the two are seeing each other, and would get a child with her to calm them down.

He says Rue Baby is a big girl now who has finished school and because of that, Akothee wouldn't have an issue with him impregnating her daughter.

Rue had in the past maintained that Tricky and her were just good friends.

"We just do skits together. Plus there has never been a place where he called me his girlfriend so It's never been official."

Akothee's daughter Fancy fights back after being attacked

Akothee's third-born daughter Fancy Makadia has responded to a hater who said her family depends on men to elevate their lifestyles.
Entertainment
2 months ago

Akothee- "Sister, learn to spend on him so that he can know you are also an independent woman."
Entertainment
2 months ago

Akothee would not entertain a man who thirsts over her daughters

Akothee- "I would get very personal if my man would dwell on my girls, ujinga is a no, tuheshimiane Utakanyaga nje."
Entertainment
5 months ago
WATCH: For the latest videos on entertainment stories