The nickname Riggy G was create by Ivy Chelimo

• Deputy President was in Kisumu for the 94th Kenya Music Festival where he joined students on stage for a traditional dance.

• Gachagua says Riggy G is not a bad name. 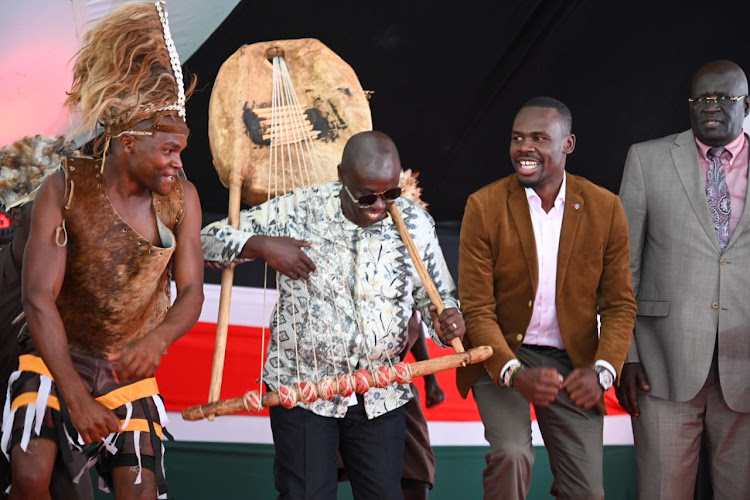 Deputy President Rigathi Gachagua has finally acknowledged his viral nickname 'Riggy G' that was given to him by a section f Kenyans.

Speaking while gracing the Gala for the 2022 Kenya Music Festival in Kisumu, Gachagua said that Kenyans had decided to get creative with his two names - coming up with a nickname he finds cool.

“I'm amazed that our Creative young people have given me a nickname (Ati naitwa nani - Riggy G), They have looked at my two names (Rigathi Gachagua), look for something sounding more easy, more melodies, and called me Riggy G and I don’t think it’s a bad name,

"So we have to let our people grow, lets us develop the talent of our people,” Gachagua said.

The creator of the viral name “Riggy G”, Ivy Chelimo says she came up with the name by chance.

The name first popped on Twitter during the Deputy Presidential debate in July and went viral weeks later on the platform.

On Friday, the Deputy President was in Kisumu for the 94th Kenya Music Festival where he joined students on stage for a traditional dance.

Gachagua, clad in dark glasses, black trousers, and a colored shirt, joined dancers on the stage as they pelted a dirge much to the excitement of the audience.

It was a Luo dance by Tonga Boys Primary School from the Nyanza region.

Education CS George Magoha who was in Gachagua's company was largely motionless on the stage after an attempt to match the energy on the stage seemed futile.

The CS nonetheless appeared impressed with the DP's moves and those of the other young dancers.

The Presidential Officer visited by DP Gachagua was involved in a road accident.
News
1 week ago

Nearly a week after taking office, Deputy President Rigathi Gachagua has not yet moved into his official residence in Karen.
News
1 week ago