KRG The Don accuses Arrow Bwoy of sending him goons

• KRG The Don is a single man after getting a divorce from his wife and baby mama.

Nadia Mukami with Arrow Bwoy before they welcomed their son
Image: Courtesy

Arrow Bwoy has called out KRG The Don for hanging out with his bae Nadia Mukami in a hotel room.

Nadia was hanging out in the room awaiting her performance at the; 'Nadia Mukami Is Back Concert.' 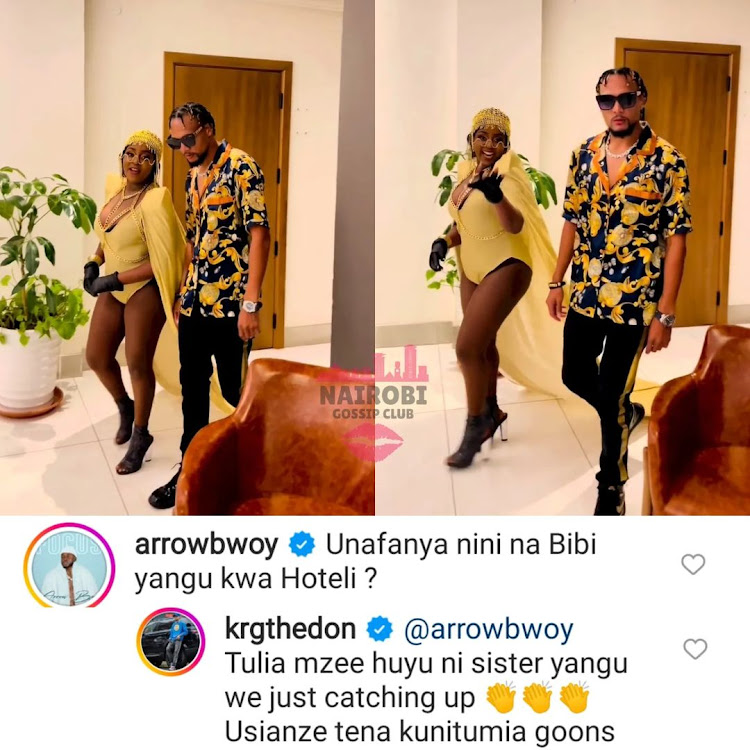 KRG The Don and Nadia Mukami before they performed

Speaking with Obinna on the Kula Cooler show, Arrow Bwoy said both he and Nadia have different versions of how they first met.

"We met in Nairobi. The first time we met 'well' is when recording the Radio Love song. But she has her part of the story. She says we met at club 64 where we use to perform Mseto."

Arrow Bwoy says when he got a chance to chat Nadia Mukami up he took it and ran with it.

"I don't remember because that time I was performing to people and she says I went downstage and danced. I remember calling her out because she was doing well but had not gotten a breakthrough," Arrow Bwoy said.

Later on, Nadia Mukami would send Arrow Bwoy some music ideas, but they had not bonded yet.

Arrow Bwoy's attention was caught by the 'Radio Love' idea and he asked Nadia to record the beats of the song first.

"When we met I did not even hit on her. I had already seen her determination and she was respectful. After recording, I do not know how love issues started," he said.

Arrow Bwoy said that he has been dating Nadia for close to 2 or 3 years now.

Nadia Mukami-I paid Arrow Bwoy to perform on my birthday

Nadia Mukami had earlier lost a child. They had chosen the names Lola and Safari for the child they lost.
Entertainment
8 months ago
WATCH: For the latest videos on entertainment stories

There are times me and Nadia block each other-Arrow Bwoy