The Bahati's tell haters their sweet love will continue to last

• Diana also addresses the age difference between the two in the song.

• Bahati assures Diana that he doesn't listen to naysayers. 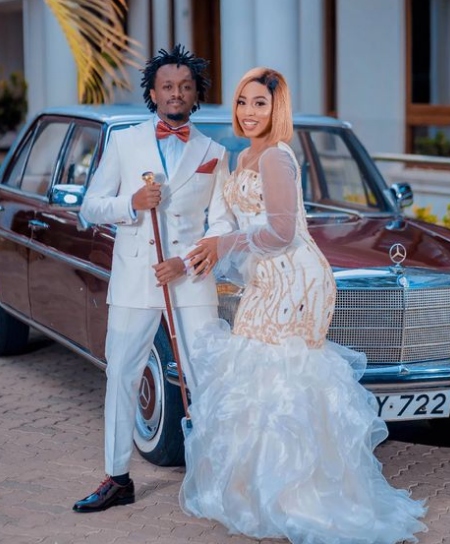 Bahati and his wife Diana Marua have released a collabo dubbed 'Sweet love'.

In the song, the two say the song speaks more about their good times and different seasons of their marriage.

Diana gushed over the song as it premiered saying

"FIIIIIRRRREEEE BAAAAAAAABBBYYY!!!!! I'M GRATEFUL FOR THE LOVE THAT GOD HAS ENABLED US TO SHARE TOGETHER. I LOVE YOU BABE... LET'S BUILD AN EMPIRE TOGETHER #SWEETLOVE #MAPENZITIGHT #DIANA_B AND HUBBY #BAHATIKENYA IT CAN'T GET SWEETER THAN THIS."

The lyrics of the song sent fans into a frenzy with Diana thanking Bahati for staying by her side even as trolls told him to leave her over her age.

If you recall, Diana's age has been an issue that fans have trolled Bahati over saying he married a 'cucu'. Cucu refers to an older woman, but Bahati responded saying age does not matter.

He defended his wife even more. The age difference between gospel singer Bahati and his wife Diana is two years and not 10 as is believed in the social media circles.

This is according to a revelation by Bahati to ViuSasa that he matured early and all he ever wanted was a woman who would not stress him out.

In other lyrics, Diana also says that their love has lasted so long despite 'mutaachana tu' batallion saying they would split.

She takes aim at Diamond Platnumz saying her marriage unlike his, has staying power.

Corazon hints at the possibility she could get back with Frankie