Nandy's wedding is said to be going down anytime now

• Nandy and Bill Nas are in Turkey shopping for outfits.

• The couple got engaged for a second time recently. 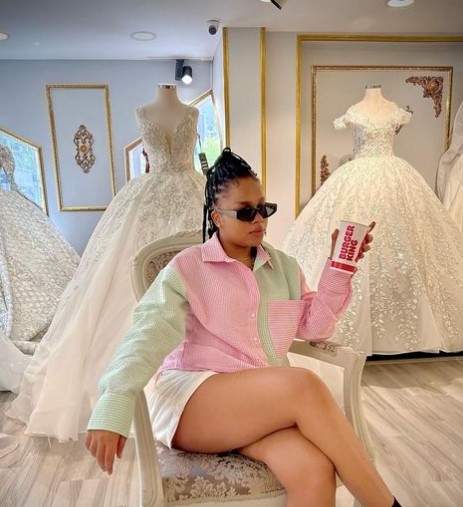 African pop princess Nandy and her fiancé Bill Nas are in Turkey shopping. The two are said to be shopping for wedding attire ahead of their anticipated nuptials.

The two are reportedly set to officially wed sometime in July 2022. Sharing with their fans how they spent the day fitting different designer wedding gowns, Nandy laughed in excitement.

Bill Nas is seen fitting a white tuxedo telling us their wedding will be a classy and traditional themed affair.

We also see Nandy wearing a traditional wedding gown as she parades clothes behind her in a snap posted on Instagram.

Nandy is also said to be pregnant and hiding it well. Bill Nas captioned his promise to marry Nandy gushing about their big day as the white Tuxedo looks impressive on him.

Bill Nas and Nandy's magical proposal happened in February as the rapper asked for Nandy’s hand in marriage during an official introduction ceremony held in Tanzania.

The happy couple wore matching black and gold outfits. Bill Nas went down on one knee holding out Nandy’s left hand as he put the engagement ring on. It was said the ring cost Ksh400,000.

This was the second proposal that the rapper made to the singer. The first time he proposed was in  2020, when he surprised Nandy as she performed on Tanzania’s TVE live show. He walked on stage and knelt on his knee to propose, before saying a few words.

The journey to this moment has not been easy. They have had an on-and-off-again relationship that has been the subject of discussion on numerous occasions as fans speculate whether this time around the nuptials will happen.

We can't wait for their nuptials to share in their joy.

Alikiba and wife reunite in Mombasa for son's first birthday