Tyler and Georgina welcomed their daughter on May 7th

•Diana Marua paid them a surprise visit before they were discharged

•Diana had a lot of advise for the first time parents 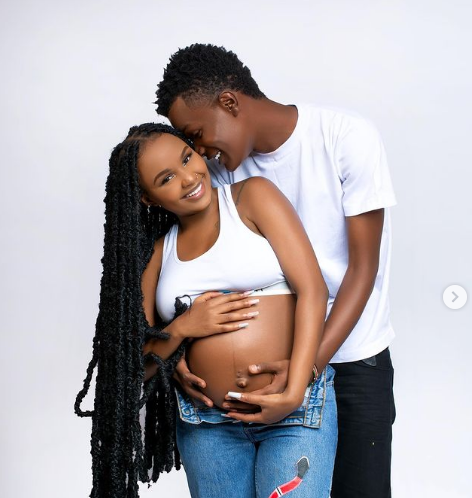 Influencer and celebrity mom Diana Marua lent the much-needed support that actor Tyler Mbaya and his girlfriend Georgina needed during their sting in the maternity ward.

On her YouTube channel, Diana told Tyler and Georgina that she saw them rushing to the hospital after they told fans she was experiencing some pains.

Georgina then explains to Diana why she was rushed to the hospital by Tyler in an emergency.

"The hospital guys told us to come in immediately after I got contractions they measured the level of dilation which had triggered the baby to come out. So, they took care of me  and when we went home they still continued and the next day we had surgery."

Diana expressed shock at the turn of events asking if they are now okay.

Georgina said that natural birthing is not easy. "Heh pushing? I did not scream, never ever catch me dead."

Tyler agreed saying, "I feel she is the strongest person and she confirmed it to me. Now I know the pain that my mum went through when she brought me into the world. In fact, she brought back my mum on my birthday."

Tyler and Georgina reveal the baby is named after his mum, Astra. "We got the name last minute," Tyler said.

Tyler also says he was in the birthing room when she was pushing.

The doctor then reveals that Georgina's baby arrived three weeks early from the due date,

"Don't ever think you used me, you just ran into a real one with a big heart." - Anerlisa tells her ex.
Entertainment
3 months ago

Grace Ekirapa has been giving her fans a sneak peek into their newborn's nursery, and just what it took to bring it together.
Entertainment
3 months ago

Why Matubia cried when she learnt she was expecting another baby
Entertainment
3 months ago
WATCH: For the latest videos on entertainment stories