• Street Filosofia, is a campaign whose purpose is to put the spotlight on the different neighbourhoods in Kenya and what makes them unique.

•  Nviiri the Storyteller and Bensoul headlined the event that was held at Club Duos. 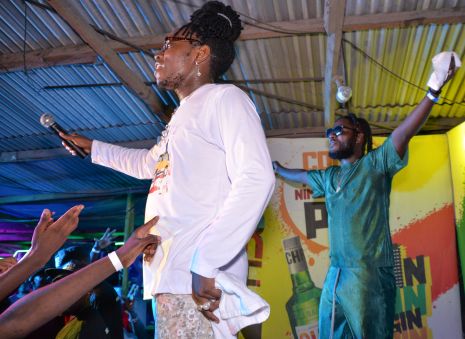 Sol Generation's Bensoul and Nviiri bring the house down in Mombasa

Last Saturday, Mombasa City was brought to life Filosofia Sherehe Mtaani made a grand entry into the coast.

Sol Generation hitmakers Nviiri the Storyteller and Bensoul headlined the event that was held at Club Duos. On the decks was one of Kenya’s finest spin masters, DJ Lyta.

Starting off the sherehe was DJ Lyta who revved up the fans who had turned out in their numbers for the show, which started at 2 pm.

The next performer on the stage was Bensoul and he put up a scintillating performance of his hit songs which included Favorite Song, Gloomy Morning, I Only Wanna Give It To You, Ningependa Nikuchukie, Not Ready, Rastafari, and That Bell.

The talented songwriter was later joined by fellow Sol Generation act Nviiri the Storyteller where they performed some of their collaborations which included Nairobi and Summer Bunny.

Nviiri would later take on the stage with his hit songs such as Nikita, Niko Sawa featuring label frontman Bien, Sorry, and Pombe Sigara.

Street Filosofia, is a campaign whose purpose is to put the spotlight on the different neighbourhoods in Kenya and what makes them unique.

The event was the fourth instalment of the Sherehe Mtaani series which has so far been to 4 other towns in the country: Nyeri, Thika, Nakuru and Kisumu.

Speaking during the event, Victoria Mbugua, noted that the Street Filosofia campaign is aimed at celebrating the local consumers and uplifting them as they work to make their lives better.

“Street Filosofia is a campaign that celebrates the strong affiliation and pride of the streets where our consumers come from. The campaign continues to pick up steam with more events coming up for Sherehe Mtaani in Meru, as well as opportunities for supporters of the brand to showcase what makes their neighborhoods unique.

“As a brand, we have always been about keeping an ear to the streets and channeling the bold, trendy and vibrant character. The Street Filosofia campaign is therefore about giving the different neighborhoods that our consumers come from the chance to tell their story – what makes them tick and more importantly, what makes them unique,” she added.

Bensoul is expecting his frist child with a lady identified as Tiffany.
Exclusives
8 months ago

Tiffany Muikamba is eagerly waiting to meet the baby.
Entertainment
8 months ago