All about the women married to the Kenyattas 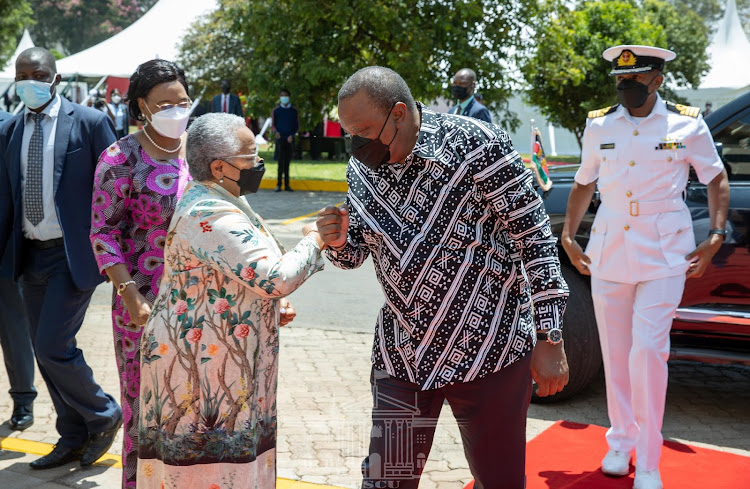 It's said some people are born into royalty but for some favor, connections and sheer luck get them there.

It's not every day we see random Kenyans getting married into the first families.

We take a look at the women married into the Kenyatta Family.

She is also the mother of President Uhuru Kenyatta.

Her other kids are Christine Wambui, Anna Nyokabi Muthama  and Muhoho Kenyatta.

She is married to President Uhuru Kenyatta.

The couple has three kids namely Jomo, Muhoho, and Ngina.

She is the daughter of Njuguna Gakuo, a former director of the Kenya Railways Corporation, and a German mother, Magdalena.

She is married to Uhuru Kenyatta's son Jomo.

Fiona is from the Nyanza region but is of mixed heritage as her mother is Kenyan and her father is a Ugandan.

Her aunt is Cabinet Secretary for Defence Raychelle Omamo.

Fiona currently has two kids with the President's firstborn son. The couple has managed to stay off the limelight for years, and so are their kids.

She is married to Uhuru Kenyatta's brother Muhoho.

Erica has Jamaican roots which she inherited from her late mum Norma Kanja.

The late Norma (Jamaican) was married to a Kenyan businessman the late Jimmy Kanja.

Uhuru Kenyatta's younger son Muhoho is not yet married, we can only wait and see who will be the lucky lady.

Michael Gitonga will vie as an independent candidate.
Politics
3 months ago

'I will miss part of Uhuru Kenyatta, not all of him,' Caroline Mutoko

Uhuru Kenyatta was spotted wearing a watch worth more than some homes in Runda
Politics
3 months ago
WATCH: For the latest videos on entertainment stories