The gardener had said they had disagreed over his pay on Saturday.

•Police said the lifeless body was discovered in a pool of blood in his garden in the Thigiri Ridge area, Nairobi with a deep cut on the back of his head.

• It is suspected the assailant used a sharp object to hack the deceased before vanishing. 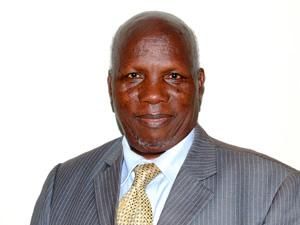 Detectives are investigating a bizarre incident in which a gardener is suspected to have killed the founder of the Leadership Institute of Kenya (LIKA) Dr. Gershon Kimeu Mwiti in Nairobi.

The body of Dr. Mwiti, 81 was discovered in his garden moments after the gardener had said they had disagreed over his pay on Saturday, January 14 afternoon.

Police said the lifeless body was discovered in a pool of blood in his garden in the Thigiri Ridge area, Nairobi with a deep cut on the back of his head.

It is suspected the assailant used a sharp object to hack the deceased before vanishing.

The deceased was with the gardener in their garden while his wife identified as Dr. Gladys Mwiti was busy in their kitchen preparing lunch.

Dr. Mwiti was a consultant at the institute he founded.

According to the wife, she tried to call the slain husband to inform him lunch was ready but there was no response on his mobile phone.

Moments later, the gardener called the woman and informed her to talk to the husband since they were not agreeing on something that he did not disclose.

Not knowing how serious the matter was to the gardener, the woman told him to solve their issues.

About 20 minutes later and after making more calls with no response, the woman told police she decided to walk to the garden to establish what the problem was.

She met a rude shock when she found the lifeless body of her husband on the ground with blood oozing from the back of his head.

She told police the gardener identified as Bernard Komu was nowhere to be seen and his mobile phones had been switched off.

It was then that she raised alarm and called her son for help. Police were called to the scene and declared the old man dead. He had bled to death due to head injuries.

Nairobi police boss Adamson Bungei said the body of the deceased, also an author, was taken to the Lee funeral home, pending a postmortem.

He said they are investigating a murder in connection with the death.

“Given the preliminary findings we are looking into murder and a known suspect is wanted over the same,” he said.

He added they will know more when the suspect is arrested and interrogated.

“They say it was about money but we must hear from him to know more because he is the one believed to have killed the old man.”

Dr. Mwiti was vocal on corruption and leadership issues. He always gave lectures on the issues.

He was also involved in current leadership wrangled in the Methodist church and always tried to solve them.

He had a Ph.D in Leadership Development from Fuller School of Intercultural Studies, Pasadena, California.

He served as a Senior Civil Servant, followed by a ten year service to African Enterprise (AE) as the National Team Leader and Chairman of the Continental committee that planed leadership intervention in cities of Africa.

Currently he was consulting with Transition Authority on transformative leadership in the newly created Counties of Kenya.

He was the chairman of the Ambassador Francis K Muthaura Foundation.

Cases of domestic violence have been on the rise at homes amid calls to solve them amicably.

Jackton Odhiambo the prime suspect in the murder of LGBTQ activist Edwin Chiloba has been described by Eldortet residents who know him as a son of a ...
Crime
2 weeks ago

Wahome who is out on bond appeared before trial magistrate Bernard Ochoi for the mention of her case on Thursday.
Crime
2 weeks ago