• Justice Jessie Lessit concluded the case early this year and set the judgement to 60 days but in communication to parties this week she set the date for July 22.

• The three victims were abducted from their car as they left Mavoko law courts, where Willie had gone with Mwenda his client. 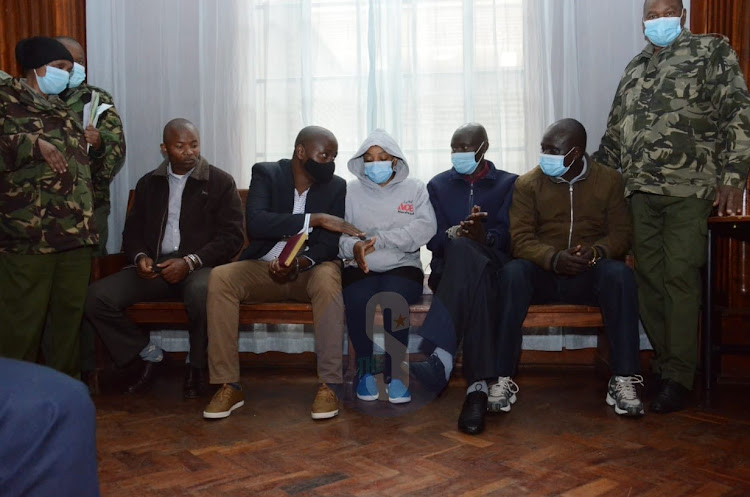 Officer Leonard Mwangi has been acquitted on all three counts of murder. The judgement came six years after the gruesome murder of the rights lawyer.

Justice Jessie Lessit concluded the case early this year and set the judgement to 60 days but in communication to parties this week she set the date for July 22.

Willie, who was a lawyer working with International Justice Mission, was brutally murdered alongside his client Josephat Mwenda and taxi driver Joseph Muiruri on June 23, 2016.

The three victims were abducted from their car as they left Mavoko law courts, where Willie had gone with Mwenda his client.

Their bodies were later found dumped at the Oldonyo Sabuk River wrapped in black gunny bags.

According to police, after their abduction, they were held for a few hours at the Syokimau police post before they were taken to a field where they were killed.

The prosecution had asked the court to convict all the accused persons saying they each played a part in the murder.

The state told the court they have proved beyond all reasonable doubt that all the five accused planned the brutal killing of the victims.

However, the defence pleaded with the court to disregard all the evidence produced by the prosecution, saying they only relied on assumptions.

Lawyer Cliff Ombeta for Leliman and Cheburet told the court that the matter had not been proved beyond all reasonable doubt as had been said by the state.

Justice Lessit has analysed a total of 117 exhibits and evidence given by 46 prosecution witnesses and 34 defence witnesses to reach her decision.

The judge had told the court that she had written more than 6,000 pages of proceedings since the trial started and it is the biggest file in her career.

Some of the crucial exhibits the judge has analysed include phone data records, mobile phone companies' cell sites analysis and DNA samples of the accused persons.

Others are the confession statement given by Ngugi and evidence generated from CCTV cameras from the high-tech Communication Command Centre(C3) and the motor vehicle recognition technology.

In the confession that implicated Leliman and Mwangi, the police informer said Leliman was the one who was killing the victims and Mwangi alongside an unknown officer was putting the bodies in the boot.

During his defence, Ngugi made a further confession orally saying he was used by the officers to commit the crime.

He confessed that the plan to kill the victims was hatched by officers from the Mlolongo police station.

He told the court that after dumping the bodies of Kimani, Josephat Mwenda and Joseph, they were hosted by Leliman and his wife at his bar in Mlolongo.

“There were two ladies serving us at the bar. I saw one in court the other day and she said she was Leliman's wife," Ngugi said.

Asked how he knew that was Leliman’s wife, Ngugi said he tried to seduce her before Leliman arrived, but was cautioned by officer Wilson Kamau “that’s mzee’s wife.”

Ngugi said he was also afraid and could not mention Leliman before because, when they were arrested, his wife and Leliman’s wife met in court and exchanged numbers, so at that point, his family got exposed.

“I swear Leliman was there and he bought us more beer. I can’t lie about it and this is not about being forced. I am doing it willingly,” Ngugi said.

Ngugi told Justice Lessit that he had decided to spill the beans even though he knows his life and that of his family are still in danger.

He said he was even afraid that he would die before confessing, saying he regrets being used by police officers in the crime.

Ngugi said he lives in fear of being kidnapped and killed in a similar style to that of Willie, Mwenda and Muiruri.

Ngugi admitted to visiting the Mlolongo police station before the killings from June 22 to June 30 and meeting police officers involved in the murder.

The prosecution believes the five abducted Willie, Josephat, and Joseph on June 23, 2016.
Crime
1 year ago

Lawyer Willie Kimani and two other victims would still be alive if Sylvia Wanjiku had raised an alarm of their abduction, the court heard.
Unlisted
1 year ago

Willie Kimani stuffed inside car boot before murder
Lifestyle
3 years ago
WATCH: For the latest videos on entertainment stories