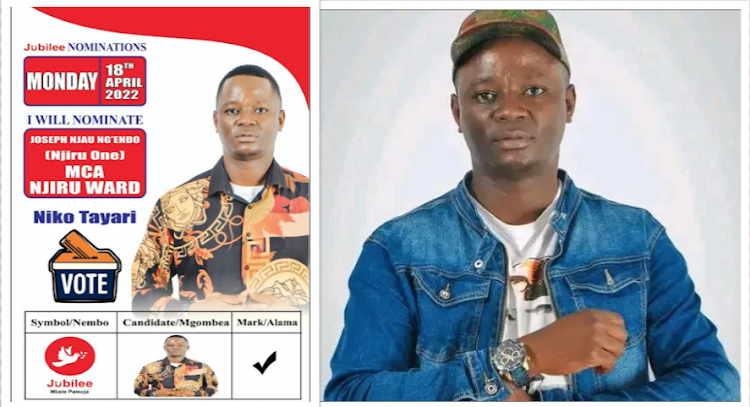 A fifth body was yesterday picked from Ngubi Forest in Lari amid investigations into the murders of people being dumped in the area.

Police and family identified the body as Joseph Njau Ng'endo, who was running for Njiru MCA seat in Kasarani, Nairobi.

His body was taken to City Mortuary.

Other bodies that had earlier been discovered were those of Fred Obare, Frank Obegi, Moses Nyachae and Elijah Omeka.

Police said they had been accused of being behind a cryptocurrency fraud mostly targeting victims outside the country.

It is believed they disappeared after fleecing their latest victim of Sh1 million in bitcoin. Bitcoin is a digital currency that operates free of any central control or oversight of banks, and tech-savvy criminals have taken advantage of this to hack into people’s bank accounts, buy bitcoins, and leave little or no trail.

Police say he was on their watchlist over claims of drug trafficking. He was ironically known to be an anti-narcotics crusader. He was arrested in 2019 while in possession of five kilos of heroin.

Njau was arrested in Westlands, Nairobi, after falling into a police dragnet shortly after returning from a trip to Kampala, Uganda. He is suspected of having gone to Kampala to procure the drugs which he had concealed inside pawpaws.

Police, who say Njau is part of a larger heroin distribution network in Nairobi, believe he procured the narcotics from a Nigerian based in Kampala.

“Police records indicate that Njau is a frequent traveller to Uganda. He has a pattern of leaving Kenya through the Busia border and coming back to Kenya through the Malaba border. He does this to evade detection,” a police report said then.

“In early February 2019, Njau made two trips to Uganda where he is suspected to have hammered a deal with his Nigerian drug associates.” Njau, the authorities say, masks his drug dealing activities in legitimate business and charity work.

“When not dealing drugs, Njau works part-time as an anti-drug abuse campaigner. He regularly visits schools and social gatherings to give talks against drug abuse.”

The suspect was arraigned in the JKIA law courts with possession and trafficking of narcotic drugs. The case is pending in court.

In Kasarani, the Star found Fred Obare's friend, who described him as a man wanting to be rich while young by indiscriminately scamming friends and strangers alike.

Some of his estranged friends and acquaintances claim he scammed them hundreds of thousands of shillings in the name of selling them accounts for academic writing.

Online academic writing is a popular industry for jobless graduates who help students abroad in completing class assignments at a fee.

Besides doing the writing himself, Obare was also a dealer in the accounts, selling them to graduates who resorted to online writing.

Zachary Bosire, not his real name, said he was Obare’s friend of five years.

Obare had taught him how to manoeuvre his ways in the online writing field and when he was able to stand on his own feet, he sought to buy an account for himself.

They both lived in Sunton area, Kasarani.

Obare sold him one account worth Sh200,000 and two months after using it, it got hacked and credentials changed.

After months of investigations, he found out that Obare was the one who pulled the trick on him. It soured their relationship.

Obare's body was among those found dumped in a thicket in Kajabe, Lari, in Kiambu county.

The bodies were taken to City Mortuary in Nairobi where postmortem was conducted before they were transferred to other morgues.

City Mortuary deputy superintendent Patrick Kibuga told the Star on Wednesday that the only body remaining at the facility was that of another man who was yet to be identified.

His body was also found in the same area of Kijabe.

On Tuesday, Lari police boss Adamson Furaha told reporters that one of the bodies had been partially eaten by wild animals.

While much remains unknown about the slain friends, a resident of Kasarani told the Star Obare was known in his Sunton neighbourhood as an online academic writer who also traded in cryptocurrencies.

Though he always stayed indoors, his friends and people who knew him said he loved bragging and kept a polished image with high-end cars.

Bosire, who still does online writing, said Obare “stepped on many toes in this industry because he loved good money and conned people indiscriminately, including his most trusted friends.”

“When he conned me in 2020, I just felt it would not take long before he is somehow stopped. I had sold land back home to buy that account as a way of business,” he told the Star.

Bosire referred the Star to another mutual former friend, Jeff Otieno, who said he lost Sh150,000 to Obare in another botched online account deal.

"He had sold me this account for which he wanted Sh200,000 but we settled on Sh150,000. But as he sold me the account, he also took money from other people in the name of selling it," Otieno said.

He reported the matter to the police and at Obare's persuasion, he agreed to have the matter settled out of court.

Obare's was also known by the boda boda riders who sometimes did errands for him.

Ongeri Mokaya told the Star Obare would send him to errands in the market and areas along Thika Road, adding that he "paid well".

But Obare had trouble telling the truth, Mokaya said.

"The man would not tell the truth. That is what often made us disagree. Let me not say much now that he is no more. He kept his distance but lived a lavish life," the rider said.

Basmati babes or pishori queens are frequenting entertainment joints looking for their next victim. Here's what you need to know
Lifestyle
6 months ago
WATCH: For the latest videos on entertainment stories