Piece by: KNA by Mary Malaki

• The residents complained of losing their livestock, as well as spending sleepless nights due to the attacks. 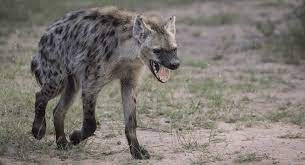 Residents of Kodera North Location in Rachuonyo South Sub-County have raised alarm over persistent disturbances and attacks by marauding hyenas.

The residents complained of losing their livestock, as well as spending sleepless nights due to the attacks.

Led by David K’ouko, the locals appealed to the Southern Region Kenya Wildlife Services (KWS) to intervene by trapping the hyenas, so that they can stop the animals from terrorizing them.

“We will not sit and watch the hyenas attacking us every now and again. We are in dire need of help,” added K’ouko.

According to another resident, Benson Adipo, three hyenas escaped after killing two of his sheep last night.

“One of the hyenas which had managed to enter the house was killed by villagers who came to my rescue after I raised an alarm,” he said.

Adido appealed to the government to take appropriate measures, saying hyenas were becoming a menace to the villagers.

He had visited the scenic Kimaya falls where he and three others took several photographs before deciding to swim.
Crime
1 month ago