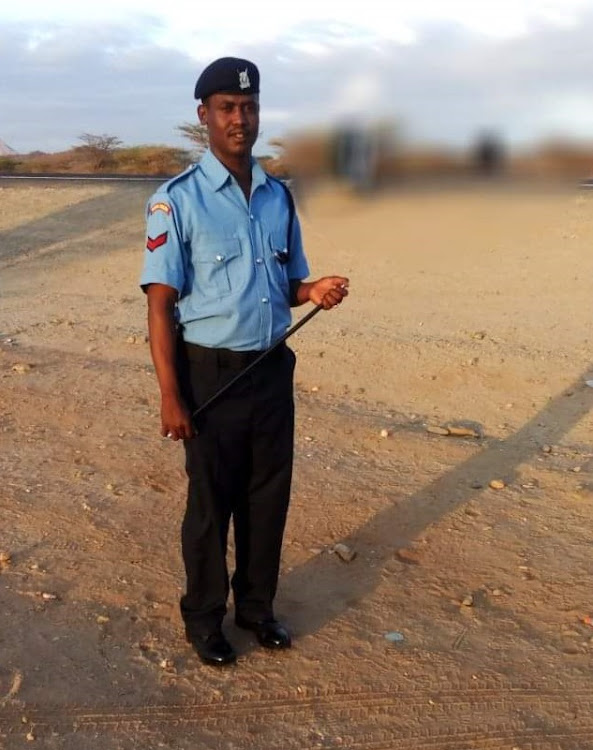 Osman Godana, 38, a police senior police Sergeant based at Laisamis Police station in Marsabit County who was abducted on Monday night near Blue Post Junction along the Thika-Nyeri highway
Image: COURTESY

The family of a senior police officer allegedly abducted by a heavily armed police unit along Blue Post Junction in Thika road has called on the government to help him trace their son.

They said Osman Godana, 38, a Police Sergeant based at Laisamis Police station in Marsabit County a year ago was abducted while travelling to Nairobi on Monday at around 9 pm.

His father Omari Godana said Osman was in the company of three other friends on a personal vehicle when four armed men, dressed in bulletproof vests ordered them to stop, taking away his son.

“They were from Isiolo County with a GSU friend based in Nairobi County. On their way at Blue Post Junction, a black tinted Toyota Noah that had been trailing at high speed intercepted them and ordered him out. All of the men were armed. All of them had a smart shave, bulletproof vests and were armed. They bundled him into their car and took him off,” said Godana, who was speaking to the press in Thika.

Ever since, his phone has been off and has been untraceable. The father of one has served as a police officer for 14 years and was once a GSU officer. The case was reported at Gatanga police station, O/B number 20/14/9/2021.

Godana said his son had been transferred to a police station in West Pokot last year but has been hesitant to report all the while.

"All I know is that he did not report to West Pokot," he said.

He said there is no instant that his son had been in trouble with the law or had a court case, wondering what led to the abduction.

The family has requested Interior Cabinet Secretary Dr. Fred Matiangi to tell them the whereabouts of their kin as they claimed he is in the hands of the police.

“We want the government to produce our son alive because from the details that we have, he was abducted by police officers. Let him be produced in court if he has committed any crime,” he said.

Speaking on phone, Murang’a County Criminal Investigation Officer Daniel Kandie said the matter had been reported and investigations have commenced.

A tribute read, "Monnie was an actress very beautiful out and inside her soul too but today we remain with nothing but memories of how she was."
Exclusives
1 month ago