• Ruto appeared on the live interview without a ring

• He explained that his wife, first lady Rachel took too long to replace his ring. 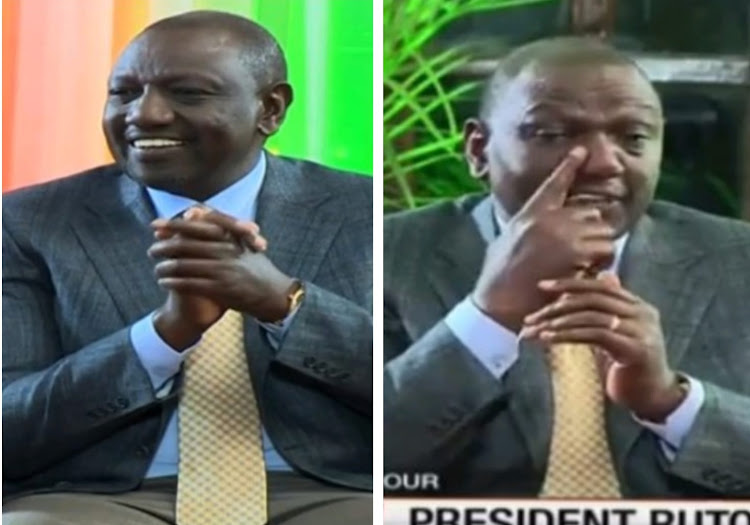 There was a light moment during President William Ruto state of the nation address when he was asked why he had not worn his ring during his, Swahili interview.

Ruto appeared on the live interview without a ring days after coming out wearing it and that caused a buzz online.

Citizen journalist Sam Gituku asked the President why during the Swahili interview he was not wearing a ring.

"As we were taking a break from the Swahili episode, you were not wearing a ring and now you have one," Gituku asked.

"Sam, you are also the only one wearing a ring here, this one does not have a ring."

He laughed off explaining that he had forgotten his ring since he was in a hurry.

"I was in a hurry to come here, I was having some meetings in the office and I had to come here, so they told me you have to dress up and go, so in the process of all that, I forgot to wear it..." he explained.

The head of state further said that he could not understand how that was a big issue yet he was discussing major issues affecting Kenyans.

"It's very interesting that it became a subject of discussion, I thought we were having a very serious conversation here, but anyway..."

He explained that his wife, first lady Rachel took too long to replace his ring.

"Let me tell you the story of the ring, when Rachel and I got married, we got our rings from Nagin Pattni it was Shs.700 then. The rings got old and it broke but Rachel took too long to go and get a replacement. That is why I was not wearing my ring," he said.

A quick check through his gallery shows that he started wearing his ring a few weeks ago contrary to the First Lady Rachel Ruto, who usually has her ring on.

Ruto: How Hustler Fund savings will be utilised

Kenya Kwanza leader and head of government William Ruto has said the money deducted from the Hustler fund will be used to invest in government ...
Politics
1 month ago

President William Ruto has said the price of maize flour would have hiked to Sh3oo if he had not won the August election.
News
1 month ago