Defence lawyer Elias Mutuma says she has nothing to fear.

• Kawira's defence team had at the beginning of Wednesday's hearing said that the governor would not testify after chairman Boni Khalwale sought clarity on the matter.

• "There is no requirement in law that the governor can be forced to testify,” Mutuma said adding that Kawira has the right to choose how to present her evidence. 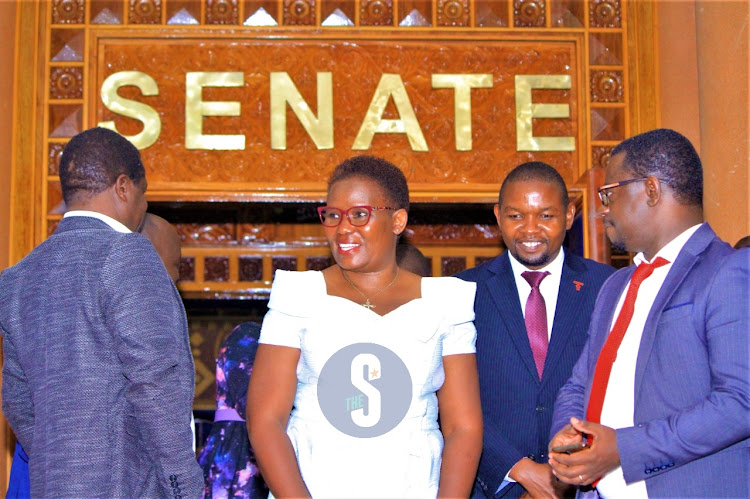 Meru county governor Kawira Mwangaza with her supporters take a break during the hearing of her impeachment case at the senate on Tuesday, December, 27 2022.
Image: The-Star

Besieged Meru Governor Kawira Mwangaza will take the stand and be cross-examined on the basis of her affidavit, her defence team now says.

The new development followed concerns from some members of the Senate Special Committee probing her case that she could be hiding something, concerns her lawyer Elias Mutuma dismissed.

"The governor had not refused to tender evidence, it was just the way we arranged our defence that we sought to have one key witness that will somehow sum up all the evidence that all the other witnesses could have brought before this Senate," he said.

Kawira's defence team led by Mutuma had at the beginning of Wednesday's hearing said the governor would not testify after chairman Boni Khalwale sought clarity on the matter.

Meru County Assembly lawyer Muthomi Thiankolu also told the committee that his team would like to cross-examine the governor on her evidence to expose the gaps in the affidavits she swore, a prayer Mutuma objected.

"There is no requirement in law that the governor can be forced to testify,” Mutuma said, adding that Kawira has the right to choose how to present her evidence.

"We cannot offer the governor for cross-examination. She has not tendered any oral evince before this committee. We risk being accused of violating her rights,” he maintained.

But in a twist, Mutuma said that following the concerns raised by a section of the committee members, Kawira agreed to take the witness stand.

"Having heard the sentiments of the committee, we consulted with out client and the client has agreed to be cross-examined on the ground of the basis of the affidavit that she has brought before this court," Mutuma said.

The lawyer, however, said the defence team will need more time to prepare the governor for the cross-examination and seal any loopholes thatmay have emerged during the cross examination of her sole witness Harrison Gitonga, the Meru County Chief of Staff.

In their earlier resolve to bar Kawira from testifying, the governor's defence team told the committee that they saw no need for her to do so since Gitonga was at all the public functions where Kawira is accused of having uttered some words and violated the Constitution leading to her impeachment.

Embattled Meru Governor Kawira Mwangaza is certain that God will see her through the impeachment case set to begin at the Senate Tuesday.
Politics
1 month ago