What Atwoli told Raila before Ruto meeting at State House

• Mr. Atwoli spoke at a funeral in Kakamega.

• He also downplayed insinuations that he met President Ruto for his own personal gain. 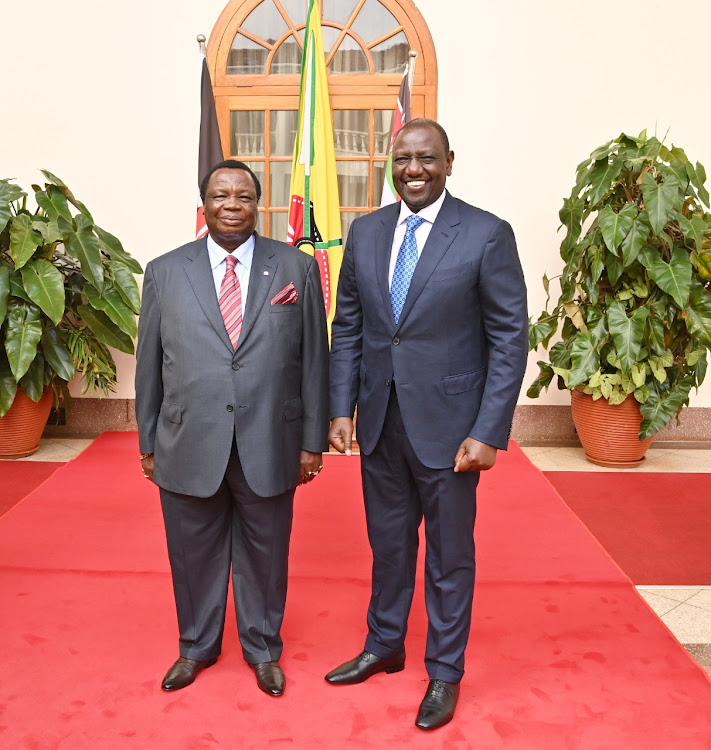 Francis Atwoli, the powerful Central Organizations for Trade Unions (COTU-K) Secretary-General has divulged that he spoke to Azimio leader Raila Odinga before his meeting with President William Ruto at State House this week.

Mr. Atwoli revealed this information during a funeral in Khwisero, Kakamega County. He said that he told Raila that his action was motivated by his job representing the workers that his umbrella trade union covers.

"I explained to Raila that  I have my own constituency which I represent and that I engaged in politics of representation where I support worker-related issues - but we did not get the presidency.

He also detailed some of the topics that he and Kenya's fifth president spoke on like the benefits of the National Health Insurance Fund (NHIF) and the National Social Security Fund (NSSF) to workers.

Mr. Atwoli made sure he distanced himself from insinuations that he had gone to the meeting for his own personal gain stating that the meeting was held in broad daylight.

His proof of this fact was that he met President Ruto who was accompanied by Prime Cabinet Secretary Musalia Mudavadi and Kakamega Senator Boni Khalwale.

He also had a very interesting analysis to make concerning the recent general election noting how Ruto had triumphed and become president despite facing overwhelming odds.

"If that young man (Ruto) snatched the seat from us yet we had Uhuru Kenyatta, who was the government, what makes you think that he will not walk over us in 2027?" he added.

The fiery trade unionist also finished by divulging that he and the head of state had buried the hatchet after the kukata miti Sugoi and mzee wa nyororo slurs that had dogged the pre-election period between the two.

Jirongo arrived at the Integrity Centre gate on Thursday but refused to get in after realizing there were journalists there waiting.
News
2 months ago