• The couple has always served goals to many but in a candid interview with Christina Lewis The Voice Of East Africa, Sarah says she was living a lie. 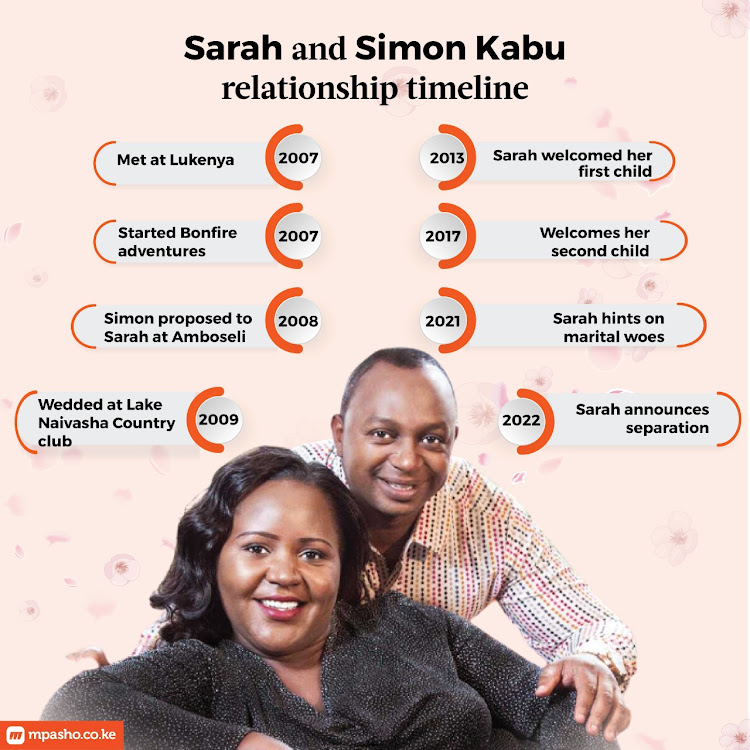 The breakup between Sarah Kabu and her husband Simon has left us with more questions than answers.

The couple has always served goals to many but in a candid interview with Christina Lewis The Voice Of East Africa, Sarah says she was living a lie.

We now take a look at the timeline of their relationship.

The couple first met virtually through a google group in which they were both participants.

After interacting virtually the couple finally met in person in 2007 at Lukenya hills where they had taken a group on a trip.

This was after they were selected to spearhead group excursions for 10,1000 for 100 members of the group.

You are not getting married to get divorced.
Entertainment
1 month ago

"People only throw fruits at the tree which bears fruits."
Entertainment
1 month ago

Sarah says the proposal almost failed as she was very moody in the morning when Kabu wanted to take her to the proposal venue.

He had planned on proposing at Amboseli Observation Hill in Amboseli.

Sarah says their relationship was flawless as they both had similar interests. They tied the knot at Lake Naivasha Country Club.

Sarah welcomed her first child (a son)4 years after marriage as she was battling fibroids.

Speaking in past interviews Sarah said she had visited many hospitals until God came through for them.

The couple welcomed their second child Anita Kabu in 2015, She is currently aged 5.

8. In June 2021 Sarah hinted their marriage was on the rocks.

She took to her socials to write a cryptic message hinting that she was already preparing for how to be a single mum.

In June 2021, the goat wife wrote a cryptic message on her social media reading;

"Already rehearsing to be a single mum of two lovely little angles."

Before this, Sarah had shown dissatisfaction with her husband hanging out with businessman Jimal Marlow.

She was not comfortable with Simon being around Jimal, who openly confessed to being polygamous.

"I am also worried about this business friendship. Please pray for him not to get lost especially after Jimal declared on Jalang'o Tv to have gone around many slay queens in Nairobi. There's a Kikuyu proverb that says Bad company ruins bad morals," Sarah wrote.

Kabu and Sarah have two kids, a son and a daughter.
Entertainment
1 month ago

Most of these kids were born when these celebs were still in their youth.
Entertainment
1 month ago
WATCH: For the latest videos on entertainment stories