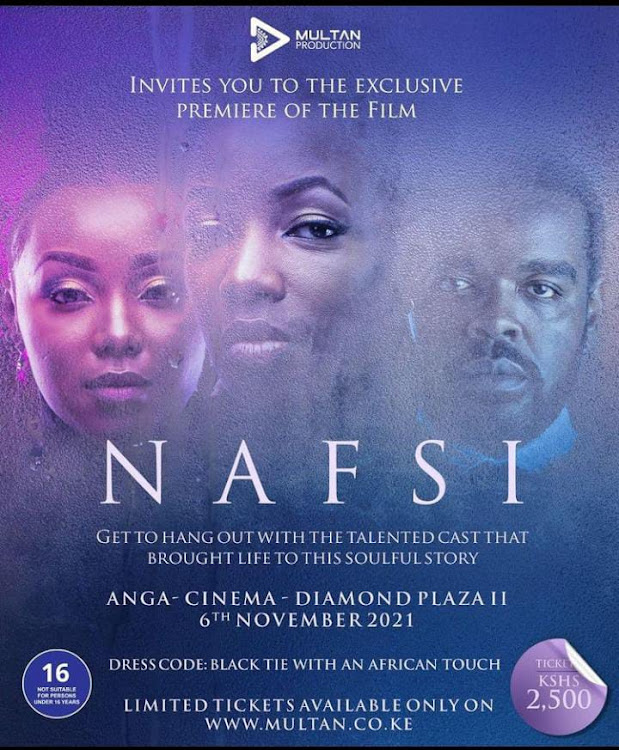 NAfSI, a film by Multan Production Limited is officially set to premiere November 6, 2021, from 2.30 pm at Anga Cinema-Diamond Plaza.

This follows a pre-screening for the cast and producers ahead of the film premiere on Thursday, October 28, 2021.

Multan Production Limited posted an official invite on their page where they urged the public to come and watch the epic premier of NAFSI on November 6, 2021, at Anga-Cinema Diamond plaza from 2.30 pm!

"You won’t want to miss an exclusive sneak peek of the movie, cast and surprise guests-you heard it first,” the invite read.

NAFSI is a film about Aisha Aisha a married middle-class lady whose childhood best friend offers to surrogate a baby for her.

However, the two find out that everything is easier said than done. Aisha has a change of heart and she and her husband want shiko to terminate the pregnancy, her friend is left feeling used and dejected.

Sebastian who is Aisha husband has a web of dark secrets that are about to shake Aisha’s world to the core.

Later in the movie, the secret breaks their marriage as Sebastian packs and leaves Aisha in the hospital to go and start anew.

NAFSI was written and directed by Reuben Odanga and produced by Dina Mwende. Odanga is popularly known for tv films and series like Nira, Nuru, Saida and Selina.

A Grand Little Lie’ producer Philip Karanja commented on the quality of the film on his Instagram, “I can’t wait to watch. Filmed to International standards.

Netflix offers subscription-based video on demand from a library of films and television series, 40% of which is Netflix original programming ...
Entertainment
1 month ago

He was set to be paid $9 million for the role that was scheduled to begin shooting this winter.
Entertainment
1 month ago