Race to save 16 passengers injured in grisly road accident 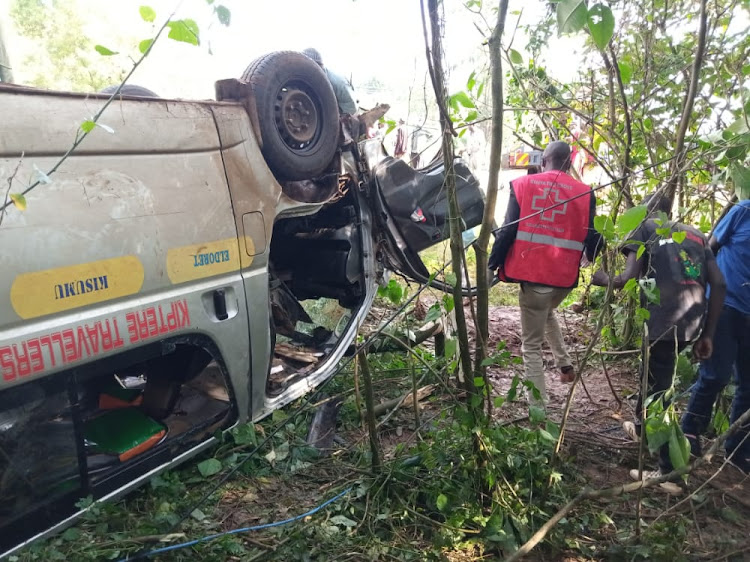 Sixteen passengers sustained serious injuries Tuesday morning after a matatu vehicle they were traveling in lost control and plunged into a ditch at Kericho-Kisumu road junction.

Gichunge while speaking to KNA in his office said that no fatalities were reported in the accident that occurred at 9.00 am.

He said that the 14 seater matatu from Kiptere travellers Sacco which was heading to Kericho from Kisumu lost control and veered off into a ditch on reaching the Kericho-Kisumu junction.

The police commander said the driver of the vehicle may have been speeding at the time of the accident and called on PSV drivers and others to exercise caution while nearing Kericho- Kisumu junction, which is at the moment quite busy since construction of an ultra-modern interchange was ongoing and several diversions have been erected at the site.

At the same time, the Red Cross County coordinator Siphia Tuei said one of the one of injured passengers admitted at Kericho referral Hospital was a pregnant woman who lost her unborn baby during the accident.

Tuei also urged motorists to drive responsibly while keeping recommended speed limits of 80 kilometres per hour or less while plying along towns and sections of the roads still under construction.

Meanwhile, the county has so far recorded about 46 cases of accidents comprised of 36 injuries and 10 fatalities between January and August this year.

The family is seeking to get closure on his whereabouts, whether dead or alive.
Crime
1 month ago