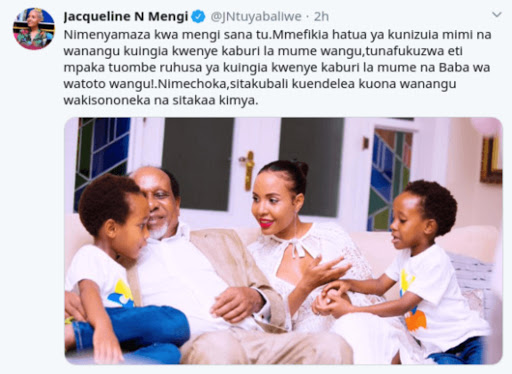 Two weeks ago, she tweeted that she had been denied permission to see her hubby's grave

Jacqueline has now shared the story with Tanzanian radio personality Millard Ayo, revealing that her brother in law, Benjamin, who is Reginald Mengi's younger brother was the one who instructed the watchman against letting her access the family graveyard.

I went with my kids to lay flowers on my husband's grave. The guard stopped me and said that he had been instructed by Benjamin not to let me in, unless he gives me permission.

I was hurt because my kids heard about it and they started crying.

She went on to say that her billionaire husband was buried where he didn't like.

Even when my husband died, we had misunderstandings on where to bury him. He had said that he should be buried in his property but his younger brother, Benjamin and his old kids (with ex-wife) refused.

There is an ongoing case in court about a disagreement of Mengi's last will taken by Benjamin.