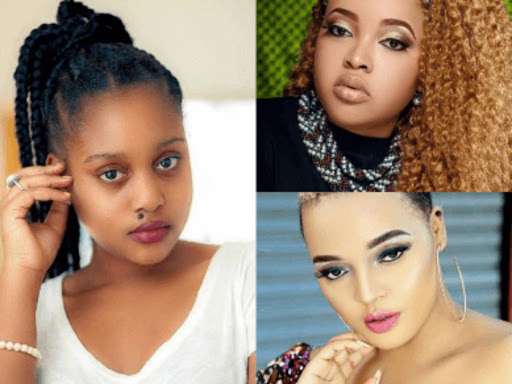 The number of women he has gotten to fall, H.A.R.D for him are many.

The bongo heartthrob is currently dating Kenyan lass Tanasha Donna and going by his love declarations of love, it is obvious the two are goo-goo gaga for each other.

Well, Tanasha is not the first women Diamond has loved there have been others.

The relationships ended in heartbreak for the bongo superstar.

Diamond has also broken his fair share of hearts. While dating Wema Sepetu he cheated on her by sleeping with her BFF’s Jokate Mwegelo and Penniel Mungilwa.

Anyhow, the father of three - two kids with Zari Hassan and a son with Hamisa Mobetto - is the master of love-em-and-leave-em.

Below is a list of women he has dated and left heartbroken. And like they say, "a broken heart is one of those experiences that all of us as humans can share, yet you can only experience alone."

Here are the women who broke Chibu Dangote's heart when they walked away from him.

She is the current love of his life. They haven't broken up, yet. But Diamond was at pains to explain why a socialite took photos of his bed and bedroom.

Diamond dismissed the cheating allegations claiming the socialite is lying.

She is known to many as the boss lady, she is mother to two of Diamond’s children; Prince Nillan and Princess Tiffah.

Zari broke it off with him on Valentine's day in a very public post after numerous infidelity reports that made headlines in East African media.

Diamond can never look at a black rose the same again.

Hamisa and Diamond started dating after he released 'Salome'. The affair attracted so much drama especially from Diamond's mum, Sandra Sanura. She blatantly told off Hamisa saying she is not qualified to be Diamond's wife.

Seeing his mum call out his affair must have broken Diamond's heart.

At the time, Zari was pregnant with Diamond's second child.

Hamisa also had a son with Diamond named Dylan. She has since moved on but is still co-parenting with the bongo sensation.

The actress had a fling with Diamond before she started dating his labelmate, Harmonize. Seems like Diamond and his boy don't have a bro code. Harmonize was aware that Wolper and Diamond had a fling before but they still hooked up.

That must have stung Diamond.

Anyhow, Wolper and Diamond's parting was amicable, they are still friends to date.

Jokate was dating Diamond Platnumz before the two broke up.

After breaking up with 'Simba' Jokate went on to date Ali Kiba for two years. Ali Kiba is Diamond's biggest music rival.

That union must have hurt Diamond to the core.

Diamond and Mungilwa broke up after Diamond accused the damsel of aborting his child.

This he sang in his song 'Sikomi'.

In part of the Sikomi lyrics, Diamond bashes his former flame VJ and Television Presenter Penny Mungilwa better known as ‘VJ Penny’ for aborting his baby.

This was even after he bought her a car, immediately she delivered the good news to him that he would be a father.

Wema Sepetu and Diamond Platnumz had an on-off-on-off again relationship for four years before they broke up and he resurfaced with Zari.

Their relationship was dogged with cheating scandals with Jokate Mwegelo being one of the women Diamond cheated with.

The two have finally moved on but Diamond is no longer with Zari,the woman he dumped Wema for.