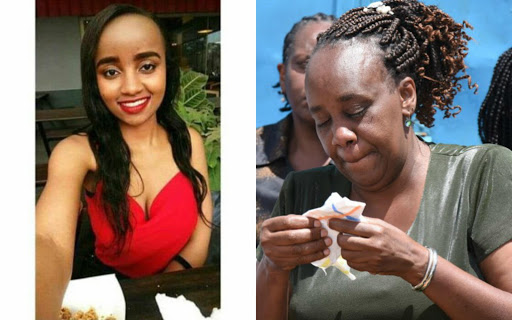 “She was such a hard worker, a good student and an amazing doctor-to-be,” Rodgers Abidha says about his friend, Moi University medical student, Ivy Wangechi.

“She stayed late taking care of patients and diligently followed up on them.”

Wangechi was killed by Naftali Kinuthia on April 9, outside the Moi Teaching and Referral Hospital in Eldoret town.

Naftali was charged with murder and is expected to spend more nights in police custody after denying the charges on April 30, when he appeared before Justice Stanley Githinji of the High Court in Eldoret.

Wangechi’s is not an isolated incident. A Pwani University student, 21, is recuperating at Kilifi County Referral Hospital after she was stabbed multiple times by her ex-boyfriend.

Naomi Chepkemboi, a third-year public health student at the university, counts herself lucky to be alive.

Her ex-boyfriend Nicholas Koech turned up at her door at 6am on a Sunday morning. Chepkemboi refused to open the door. However, Koech begged her, saying he should be allowed in as he had come in peace.

“I opened the door and walked outside to talk to him briefly. I then returned to my house,” she said at her hospital bed during an interview.

Koech tried to convince her to work out their relationship woes. She refused and said goodbye, and thought he had left the premises.

Unbeknownst to her, Koech was still around, and he managed to get into the house. He then locked the door and proceeded to phone her father and then stab her in the back several times.

Left for dead, Chepkemboi texted her neighbour, who had an extra key, to come open the door and take her to hospital.

Chepkemboi and Koech have a child together and separated last year after a two-year relationship.

“Koech was not responsible enough towards my daughter, and that’s why he walked out of the relationship,” she said.

She told him to keep away from her and decided to relocate to Kilifi, while he remained in Nairobi.

Her request to be left alone clearly fell on deaf ears, as Koech travelled from Nairobi to Kilifi, where this attack took place.

Koech was arraigned in Kilifi law courts but the police were given 14 days to complete their investigations before charging him with attempted murder.

Femicide is an emergency of sorts in Kenya, with the lives of young women in danger due to men unable to accept what they perceive as ‘rejection’. Kilifi Governor Amason Kingi says these crimes have become increasingly common.

“Its time all stakeholders in this country join hands and hold a conference in order to respond to this issue in the same way corruption is being dealt with," he said.

The governor condemned the attack of the Pwani University student and similar cases around the country and called for action before the problem escalates.

In another case in Nyeri, mother of two Mary Wangui was allegedly killed by her ex-husband. Wangui was living in a rented house along Nyraibo shopping centre after she left her matrimonial house in Ihururu, Tetu subcounty.

A neighbour said Wangui’s former partner traced her whereabouts and killed her as she stepped out of her home. The suspect is at large.

Violence against women has been on the rise in Kenya recently. This year alone, there have been at least 60 instances of women murdered at the hands of men that have been reported, and the number seems to grow.

It’s on record that for the past three years, there has been a steady increase in femicide. Lately, not a day passes before a woman is murdered by a man

The UN Office on Drugs and Crime in 2017-18 showed that Kenya was among the countries with the highest cases of female homicides.

Titled ‘Global study on homicide: Gender-related killings of women and girls’, it found that women are more likely to die in the hands of someone they know.

Feminists in Kenya activist and lawyer Vivian Ouya said the UN is right to raise the alarm. “It’s on record that for the past three years, there has been a steady increase in femicide. Lately, not a day passes before a woman is murdered by a man,” she told the Star.

Ouya said between January and April this year, 50 women have been murdered, and these are just the cases that make it to the mainstream media.

When questioned about the manner in which the media reports these incidents, Ouya said the reporting from both the mainstream and social media has been largely insensitive and has enabled victim blaming and shaming.

“The media must ask sensitive and relevant questions during conversations around gender-based violence. It must not ask questions that aim to portray the victim as deserving of the acts of violence,” she said.

“These reactions have surely reflected the true state of our values as a nation and demonstrated the extent to which Kenyan men hate Kenyan women. The systemic oppression of women in Kenya is alive and well if any of these senseless murders and misogynistic reactions are anything to go by.”

Ouya also faulted Kenya for being a nation that celebrates public officials who are perpetrators of violence against women.

“We are a nation where political parties do not expel their members for perpetrating femicide. When private citizens see such grotesque enablers and perpetrators of violence going unpunished, is it really a wonder that they emulate it?”

A march against violence against women

As stated by the UN, most cases of violence against women are driven by fear of abandonment, which has ties to rejection. But what is it about rejection that men can’t handle?

Ouya said it is rooted in patriarchal entitlement, which has eaten deep into our society. She said this entitlement has been normalised and is often seen to be fashionable.

“A man murders a woman in cold blood and all we can do is come up with nonsensical excuses like, 'You know men have no patience', 'Men are hot-tempered', 'Men can't take NO for an answer, and we have no choice but to live with it', among others,” she said.

It is this patriarchal conditioning that governs the behaviour of men, too. Ouya said men have often been conditioned to think that vulnerability is a weakness and that they should never accept any form of defeat.

“This notion gives them a false sense of superiority, which makes them think women should not, cannot and do not have an inherent right to say NO to their advances and propositions,” Ouya said.

She said there is a desperate need for these narratives to be dismantled. “Men have a lot of unpacking and unlearning to do, especially with their entitlement to our bodies, time, space, labour and energy.”

Alongside the patriarchal set-up of our society, our culture has a huge role to play when it comes to violence against women.

Ouya said there are some cultures which justify the beating of women as a form of discipline, while others belittle them and view them as subordinate to men.

“There is also the widespread acceptance of violence as a means of resolving conflicts,” she said. This, in turn, normalises gender-based violence and makes women vulnerable to violence from society at all levels.

It is also something that is passed from generation to generation, and it keeps evolving with time to new forms, particularly through the trivialisation of ongoing cases on social media in the form of memes, victim blaming, threatening women online and justifying the acts of violence.

When looking at gender-based violence as a whole, it is important to look at what the government is doing to address this pressing issue.

“The government has not done much when it comes to dealing with gender-based violence and femicide. There's little implementation of laws against GBV, no mention of femicide in our laws, and the police require better training on how to handle such cases,” Ouya said.

“The government does not value women. The police, in particular, are known to go by the mantra ‘investigations are underway’, yet we never get closure. We never get substantial reports. We get told, ‘We will bring the culprit to book,' and it ends there.”

Adding, “The President recently gave a State of the Nation address, and there was not one mention of femicide and recent cases.”

Ouya’s views echo those of many women who fear for both themselves and the women around them. It is a mixture of frustration, anger and helplessness, heightened every time another woman is killed.

Ivy Wangechi was buried on April 19 in Mahiga, Nyeri county. She was the firstborn of her family and was set to become a doctor, a dream cut short because one man could not handle being told no.

At the funeral, her mother, Winfred Wangechi, ended her speech with the following words, “Fare thee well, my sleeping beauty. It’s so so sad to say goodbye, so I’ll see you in heaven.”

Words which no mother should ever have to say.