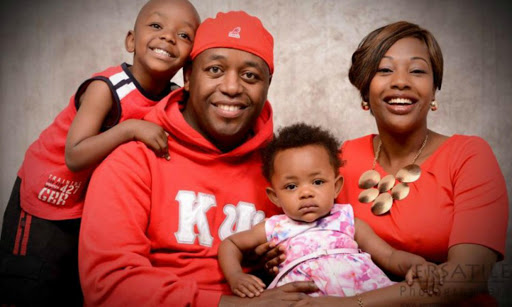 The late Janet Kanini was a former NTV journalist and a mother of two who succumbed to death after battling lung cancer.

1st April this year was a sad day for Janet Kanini's family, fans and friends as she was pronounced dead.

Six months down the line, her husband George Ikua, has tried to move on and narrated to Victoria Rubadiri on her show Victoria's Lounge how the journey has been so far.

"Janet died on April first and on April Fifth was our son's birthday and we decide we are having it anyway.The massive pain is there is a 7 and a 4-year old who will never see their mother again, it breaks you when you see that." George Narrated

He continued to say how much his nanny has helped his household;

"My nanny of seven years has just held the house on a system, my house never lacks. Its a fully functioning house."

"We sleep the three of us, my son, daughter and myself. We decided to re-do their rooms,the maids in the house needed to re-arrange the room. All Janet's clothes were gone.Even her most intimate clothes were packed into bags and starched on drawers in the spare bedroom."

He continued to emotionally narrate how that helped him

"I broke down completely and started to realize these clothes are not Janet.I would never have moved those clothes for three years but i started realizing thats not Janet."

George says he was angry at everything when he received the news that Kanini was no more.

"I went, closed myself in the spare room, pulled down those bags, started tearing through them and i realized these clothes are not Janet. I sealed them back."He told Victoria Rubadiri