Shiru Wa Gp Thanks Her Fans For The Support They Offered 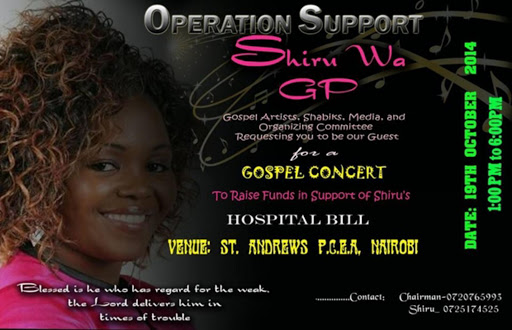 Gospel Songstress Shiru Wa Gp is more than grateful to her fans for the help they offered having raised 4. 5 million shillings in just 2 hours. This happened on Tuesday morning during a live morning show at a local radio station.

The money was aimed at assisting her foot her bill.

Just recently Shiro lost her one and a half month old baby boy while his twin sister is still in nursery at MP Shah hospital after being born two months premature.

"After the delivery, I got a chest infection. I was admitted at the Nairobi Womens Hospital where i have been receiving treatment. I am now out of danger although am still taking medication. My complications have left me with a huge medical bill plus my little girl is still in hospital" Shiku said.

"The babies were born two months early and the girl was under weight and had to be put in an incubator . It has been rough for my family and fans. I lack enough words to thank them for their support. I have kept myself strong and God has not abandoned me,"she continued.

Story courtesy of The Star newspaper