The rapper asks Kipchoge to "keep jogging" in the song

• Eliud Kipchoge also paid tribute to Nyashinski after he wrote a song for him, 'Marathon Runner'.

• The song was released three years ago and has over 2 million views on YouTube. 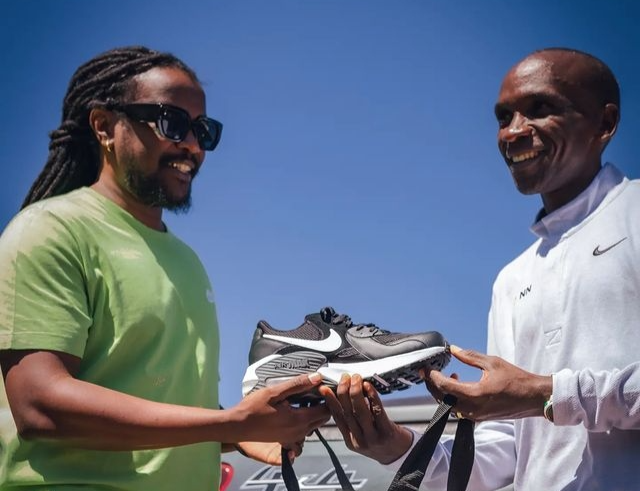 Long distance runner Eliud Kipchoge paid tribute to Nyashinski after he wrote a song for him, 'Marathon Runner'.

In the song, Nyashinski asks Kipchoge to "keep jogging". The song was released three years ago and has over 2 million views on YouTube.

In a recent interview with Mpasho's writer, Elizabeth Ngigi, when Kipchoge was unveiled as the PhantomX2 brand ambassador, he said Nyashinski is his best artiste so far.

"Nyashinki's music is great and clean. He is encouraging the youth to work hard," he said.

A few months ago, Kipchoge also gifted the singer major gifts. The two legends shared inspiring moments hours into one of the singer's events in Eldoret.

Nyashinski shared his delight at meeting Kipchoge on a beautiful note. The runner appeared to have received Nyashinski on arrival in the town.

"Humbled, is what I am. Truly, no human is limited. @kipchogeeliud Keep Jogging!" he wrote.

The world record holder was unveiled as the PhantomX2 brand ambassador.

The new range of Phantom phones from Tecno is partly built with recycled material. Its fibre back cover is made up of recycled plastic bottles.

It is the first-ever eco-friendly phone in the world.

The athlete adopted 50 acres of the Kaptagat Forest, where he hopes to plant more than 1,000 indigenous trees as a way of restoring the forest to its original cover as a way of conserving the environment.

The long-distance runner became the first human in history to run a sub-two-hour marathon in the city of Vienna, Austria.

Eliud Kipchoge: What I want to be remembered for

Marathoner Eliud Kipchoge has revealed that family is all he has when he is not creating world records.
Exclusives
4 weeks ago

Nyashinski shared his delight at meeting Kipchoge in a beautiful note.
Entertainment
2 months ago