Eliud Kipchoge: What I want to be remembered for

The runner said he made Kenya known as a running country.

• Kipchoge said he goes to the farm and likes spending most of his time with his family. 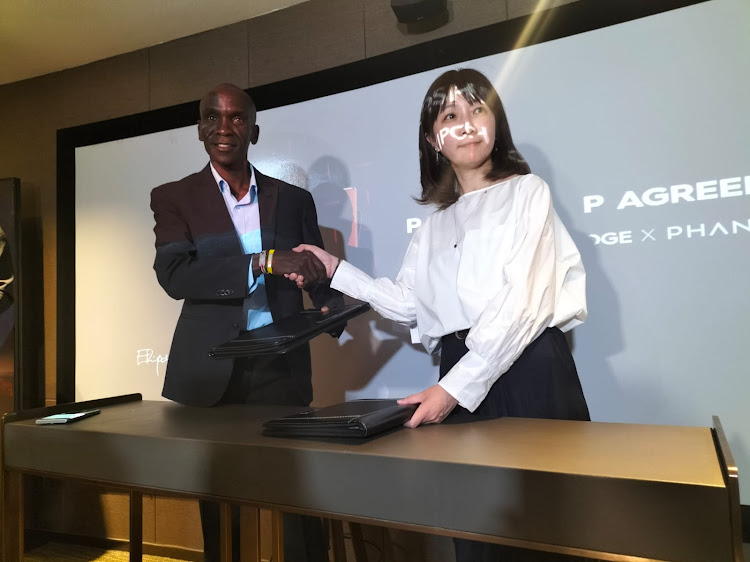 Marathoner Eliud Kipchoge has revealed that family is all he has when he is not creating world records.

Then Kenyan long-distance runner talked about his favourite food, saying he loves ugali and beef.

When he is not training, Kipchoge said he goes to the farm and likes spending most of his time with his family.

He also talked about his children wanting to follow in his footsteps.

"I will support any of their dreams," Kipchoge said.

On how he wants to be remembered, Kipchoge said he made Kenya known as a running country.

"To any upcoming athletes, treat athletics as a profession and make positive things out of it. No human is limited and so keep pushing," he said.

Kipchoge was unveiled as the PhantomX2 brand ambassador.

Kipchoge said the environmental qualities of the new Phantom X2 phone was the biggest sway he needed to take up the role of being the brand ambassador for Tecno’s new luxury phone range.

The new range of Phantom phones from Tecno is partly built with recycled material. Its fibre back cover is made up of recycled plastic bottles.

It is the first-ever eco-friendly phone in the world.

Kipchoge adopted 50 acres of the Kaptagat Forest, where he hopes to plant more than 1,000 indigenous trees as a way of restoring the forest to its original cover as a way of conserving the environment.

The long-distance runner became the first human in history to run a sub-two-hour marathon in the city of Vienna, Austria.

The 37-year-old also won the Berlin Marathon with a final time of two hours, one minute and nine seconds.

Phantom X2 Series is available for pre-order between January 5, 2023 and January 18, 2023 in authorized Tecno branded shops, Tecno Official Website and partners including Safaricom Shops and Jumia.

Kelvin Kiptum obliterated a strong field to win the Valencia Marathon, clocking the second fastest time in the world over 42km.
Entertainment
1 month ago

Nyashinski shared his delight at meeting Kipchoge in a beautiful note.
Entertainment
2 months ago