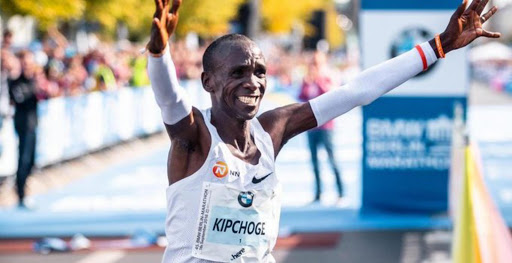 Olympic Gold-medalist and marathon world record-holder Eliud Kipchoge, and 2020 Tokyo Olympic running champion Faith Kipyegon join a stellar cast of international changemakers to turn up the pressure in the fight against malaria.

This launches the second chapter of the multi-award-winning Draw the Line Against Malaria campaign in an effort to end the world’s oldest and deadliest disease within a generation.

The campaign seeks to turn the pressure on world leaders as malaria deaths reach the highest number in nearly a decade.

“In the past, suffering from malaria has stopped me from running. Today, over 1000 children in Africa will die from the disease. Malaria is stealing their futures. But this is a human problem that we can solve because despite the challenges no human is limited.

We are calling on leaders to recommit to ending malaria at the Kigali Summit and later this year at the Global Fund Replenishment conference by contributing at least $18bn to achieve zero malaria within a generation,” says Eliud Kipchoge, Zero Malaria Ambassador and member of the MNM UK Leadership Council.

The artists have fronted this year’s campaign film that will showcase at the Paramount/MTV Africa Day Concert on 28th May 2022. The campaign film has been directed by Grammy-winning Meji Alabi, a London-born Nigerian filmmaker.

“I’m proud to join this incredible campaign because I want to see an end to malaria, a disease of deep injustice particularly as it affects the world’s poorest people, especially for women and girls.

When I was pregnant with my daughter, I was so careful to protect myself including making sure I slept under a mosquito net because one in three expectant mothers suffer from malaria in sub–Saharan Africa.

Now my daughter is three, she is the light of my life! My mission is to keep her safe.  We sleep under a mosquito net and we see great tools now becoming available like celebrating the world’s first malaria vaccine trialed in Kenya. This gives me great hope – I want my daughter to grow up and see the day when we have zero malaria in Kenya,” comments Faith Kipyegon - Zero Malaria Ambassador.

Speaking during the 7th Global Fund Replenishment preparatory meeting, Uhuru said, “I call upon all governments and indeed all stakeholders including the private sector to join us in enhancing the pledges made during the 7th replenishment cycle that we anticipate in the latter part of this year.

I do believe none of us will regret in investing in this worthy venture and why do I say so, because a healthy population means higher productivity.”

Kenya has made enormous strides in the fight against malaria thanks to a concerted national effort by the Government, partners and communities, shrinking the malaria map and further reducing deaths by 2 per cent and saving millions of lives.

In April 2022, the Zero Malaria Campaign Coalition (ZMCC) was launched by the Ministry of Health through the Division of the National Malaria Program together with diverse actors to coordinate and elevate advocacy efforts and communications initiatives to increase political will and investment toward a malaria-free Kenya.

The Zero Malaria Campaign Coalition seeks to support the ZMSWM movement, foster multisectoral partnerships to amplify the work of the malaria community, increase awareness of the negative impact of malaria within society, and drive forward the goal of a zero-malaria country wide.

Kenya's greatest marathon runner of all time, Eliud Kipchoge, doesn't care for fame. At all.
Entertainment
1 month ago