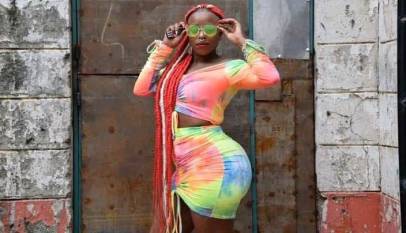 Upcoming socialite, Manzi wa Kibera has finally come clean on how she got her voluptuous behind.

Speaking to Mpasho.co.ke, Manzi wa Kibera said she didn't get her behind from God but rather bought it. This, she did by taking body enhancement pills she bought from a 'doctor'.

"Hii mali safi legit and siwezi wadanganya ni original" (This is some legit stuff but I won't lie to you that it is natural ). My behind is not from God but from a doctor. I bought pills because I can't afford a plastic surgeon yet but I will be visiting one in November for surgery," she said.

She says one of the complications she got was that one of her b*tt che*ks got bigger than the other but she 'hustled ' her way out of the situation.

"I used to wear deras and stay indoors because the moment I'd step out, my neighbors would make fun of me until when I applied serum and I'm good now."

Asked about the much publicised 'wedding' with ex-husband Dela Obidan, the controversial socialite revealed the two met online and it didn't take long before she fell for him.

Manzi says the guy's money shocked her and she ended up falling for him. Manzi wa Kibera also revealed that she has been working on getting a passport in preparations to get a man who would relocate from Kenya, where her name would eventually change to, 'Manzi wa Majuu'.

'I dated Eric Omondi when he was with Chantal,' Manzi wa Kibera claims

" People were abusing me online, saying I pretend yet I live in the ghetto." - Manzi wa Kibera
Entertainment
5 months ago

Vera said she finds Manzi was Kibera interesting and would love to give her the special honour of attending her exclusive party.
Entertainment
1 year ago