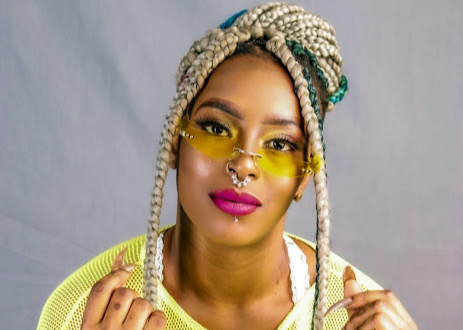 Upcoming socialite Manzi Wa Kibera, has called out a local media house for saying she is living a fake life.

This was after she took to her socials to 'lie' to her fans that she had bought a Prado.

"Ebru TV I appreciate your entertainment segment but I said the car is not mine, I didn't say my life is fake!!! My life is real, Gerrit right." 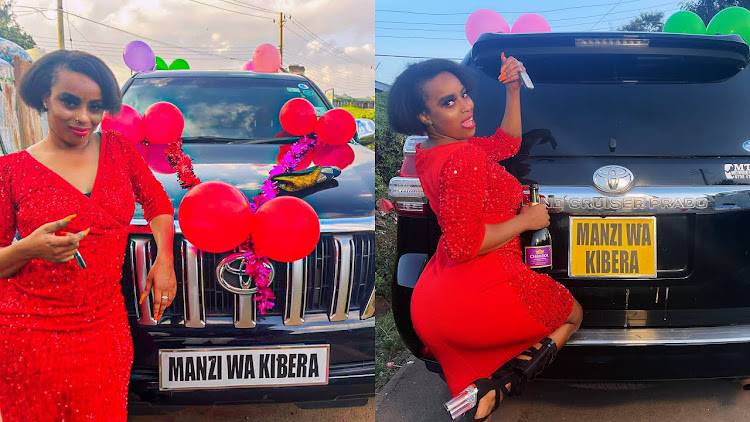 On 31st March she posted videos of a black Land cruiser TX with her name on the number plate and her next to the machine dangling the car keys while sipping a drink.

In the video, she's heard saying, "My enemies will know me. I'm happy, my car, my car."

Retracting her lie, Wambo as she is fondly known explained that she was just marketing the car adding that she could not afford it.

She said she decided to come clean so that people won't castigate her in case they see her riding on a boda body.

Early this year Manzi Wa Kibera has opened up on struggling financially adding that some people in the industry were using her.

"I am not ashamed, at first I did not even want people to know where I stay.

I wasn't confident. At first when I showed people my house... I did not expect them to contribute money to me. Right now I am used to it, anyone can visit me," Manzi was Kibera shared.

The socialite said she can not move from a single room to a bigger one since she can not afford to pay more rent.

"If someone can help me then it is ok. But I wouldn't want to stress myself with rent in a one-bedroom house. Sometimes I can not afford the 2500(current rent) how will I go to a 5,000 bob house? People were abusing me online, saying I pretend yet I live in the ghetto. I would love to leave this house," Manzi wa Kibera said amid tears.

She added that sometimes generous fans send her money when she says she is broke and has no food.

Despite her living conditions, Manzi was Kibera finds a way to slay in costly wigs or cheap ones that are made in her hood.

"I have two legit wigs... one was bought by my friend Melisa in Germany. These other ones are braids made in Kibera, and the other two I was given by a shop to market them," she shared.

Alleging she had bought the car while she is struggling to pay 2500 rent is what made Netizens cast doubt on the allegations.

Wife Material is a show aimed at helping Eric Omondi get a wife.
Entertainment
4 months ago

Most of these surgeries cost between half a million and above.
Entertainment
4 months ago

According to Otile Black the act has left his woman, Manzi wa Kibera, sad and depressed given it is where he earns her daily bread.
Entertainment
4 months ago
WATCH: For the latest videos on entertainment stories