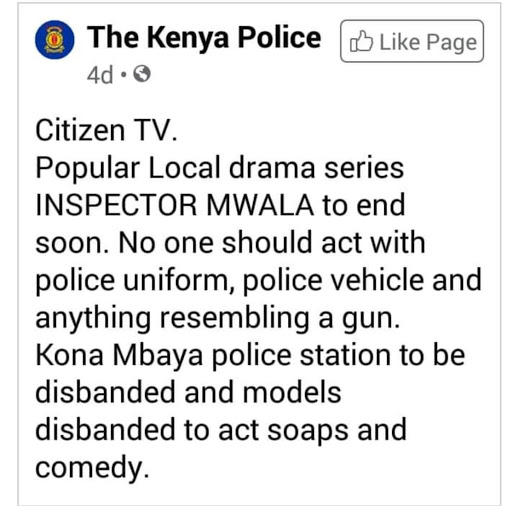 The interwebs have been ablaze over a screenshot of a social media post done by 'The Kenya Police' asking Citizen TV to cancel the Inspekta Mwala show.

Sources within the police claim that the social media post is "fake".

The official handles for the National police service are verified.

It has come to our attention that there are posts circulating on social media allegedly made by Mr. Charles Owino, The National Police Service Spokesperson. Mr. Owino is currently on annual leave and has not made any comments about the expose which aired recently.

However, according to the constitution Section 101 (1) (a) & (b) of the National Police Service Act Cap 84 laws of Kenya prohibits the use of Police uniform by civil and any thing that resembles a police uniform.

Although 101 (2) gives room for one to seek approval from the IG to use the same for artistic purpose.

The same applies to Section 279 of the KDF Act in relation to any service uniform although the KDF Act does not give room for permission even in artistic purposes.

The KDF Act however does not outlaw use of brooches or Ornaments.

One entertainer tried to interpret the law,

"Although in Administrative law where one is required to seek permission or authority it is always assumed that it will not be unreasonably be withheld."

"But after the expose on Citizen TV the Police can argue it is in public interest and national security to withhold the permission. A good reason if you ask me. I might be wrong though... The law is clear.. but clear as mud😂."