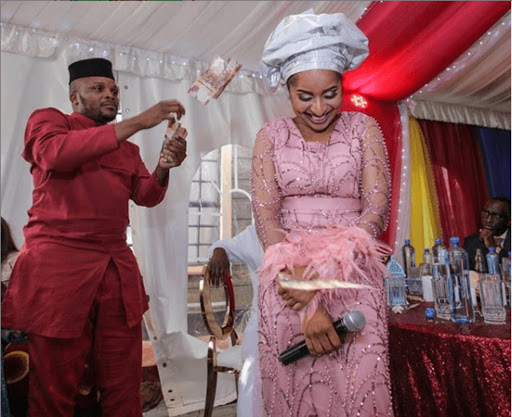 Weddings are exciting, it is a day when two people come together to seal their relationship.

In Kenya, the mere thought of the word wedding quickly shifts to a scene of a white wedding.

A bride all dolled up in a white gown and the usual well-fitting suit for the groom but some celebrities have chosen to do things differently by embracing the Kenyan culture and traditions by choosing a traditional theme for their big day over the normal white wedding.

The two met in a campaign rally for the Jubilee party where Susan Kihika was running for a senatorial seat while the groom is a close associate of the deputy president.

Susan Kihika and Sam Mburu made their marriage official choosing to go with a traditional theme held at Kihika’s family ranch in Marmanet, Laikipia county.

The bride was beautifully dressed in a gold-embroidered gown while the groom was dressed in an African themed white dress code.

Among those attending was the deputy president who witnessed dowry negotiations, Kapsaret Member of Parliament Oscar Sudi and Malindi MP Aisha Jumwa

2. Jalang’o and Amina Chao- In October 2019, comedian Felix Odwuor alias Jalang’o surprised many when he wedded the love of his life Amina Chao in a traditional wedding.

Jalas who has been keeping his relationship as a secret left many mouths wide open when news broke that the comedian had chosen to settle down with his long term girlfriend.

The wedding was an invite-only occasion attended by close family and friends only. Their wedding took a different turn; instead of the usual Kenyan traditional wedding, they decided to add some excitement to it by following the Nigerian tradition mixed it up with some Islamic vibe to it because of Amina Chao’s religion.

As a luo man Jalang’o was quick to add an extra vibe to his wedding by following the Nigerian ritual in which they blow money to the bride and so did the comedian who did the same by showering his wife with a thousand notes.

There was also some colourful scene of people dressed in white Islamic attires for the bride and her family with respect to her religion.

The couple who met on the Likoni ferry channel back in 2009 also chose to go with the traditional theme and they executed it perfectly.

The big wedding held in Kiamugumo primary school followed the Agikuyu traditional theme from the decorations to the dress code of the bride and the groom and the entertainers of the event.

4. Nyashinski and Zia Bett- Hearts were broken with the announcement of singer Nyashinski’s wedding; I mean who even knew that Nyashinski was seeing someone?

The two lovebirds got Kenyans talking but as usual decided to keep the wedding low-key by inviting only close friends and family.

Similar to the trend, these two also embraced the traditional wedding with the couple dressed in Ankara outfits and Nyamari Ongegu alias Nyashinski finalizing the look with a black cane