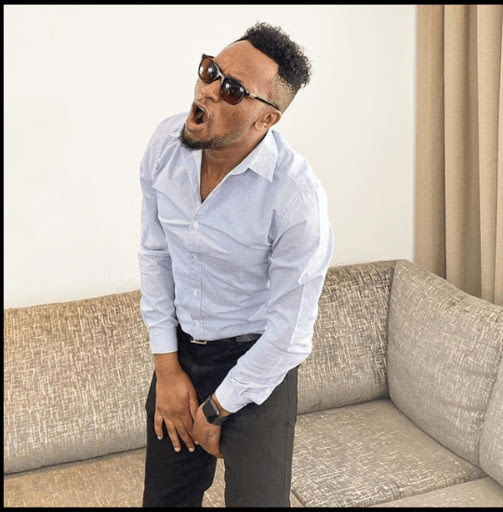 DJ Mo and his beautiful wife gospel musician Size 8 have had a rough patch after a Baharain based beautician claimed she had a fling with DJ Mo.

However inspite of it all, the two decided not to let the events that took place destroy their marriage.

This week they celebrated their son, Muraya Junior's first birthday.

But before that, he underwent his first father son bonding activity. Alienda kinyozi.

The father of two could not hide his excitement of taking his son for his first shave, his wife wanting to serve Mo with a cup of revenge, she insisted his elder sister Ladasha Wambo accompany them.

Size 8 revealed on their vlog how much she so much wanted his son to cry to his father in order for him to also have a fair share of what she usually goes through with Wambo in the saloon.

However, Muraya Jr who was rocking a soft baby afro was quite the opposite of what she had predicted, the little boy proved to be a brave young man.

He did not cry, actually he was daring enough to want to hold the shaving machine which for most parents would predict their children would cry from the fear of buzzing sound of the equipment.

Fans also went ahead to praise the celebrated song bird for breastfeeding her son in the vlog claiming that most celebrities shun from breastfeeding.

This is because of the sagging effects it would have on their boobs.

The Crossover 101 DJ whom fans noticed has been off air for weeks now could not hide his joy of watching his son play on a toy car as he recalls the tough journey he and his wife went through from pregnancy to delivering time.

On Thursday as the little boy turned 1 year old, Size 8 revealed that she almost died with her baby when delivering him.

Fans could not help but notice the mirror-like resemblance of Muraya Jr and DJ Mo as he was taken for his shave as Ladasha on the other hand got her hair and nails done in the salon like the princess she is.