From Natalie Tewa to Khaligraph, why celeb couples who worked together broke up 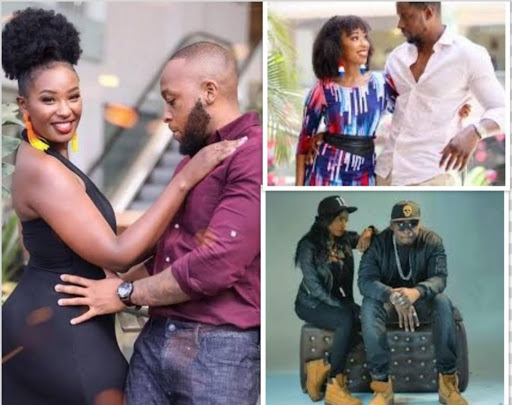 In this day and age everything is revolutionized, things are changing so fast and nobody wants to be left behind.

Folks now want to bring business into their relationships and of course, at the end of the day, it’s always about the paper.

Couples nowadays work together towards a common goal to try and better their future and those of their kids. Be it business, music, art or any other form of investment; they both put in work and try and make as much money as possible.

Marriage or rather committing is not a walk in the park and sometimes working together on an investment strains the relationship even more. Several of our Kenyan celebrities have tried working together but it only ended in tears.

Khaligraph Jones has always been known for his rap skills but after his hit ‘Micasa Sucasa’ we got to see another side of the rapper.

He featured Cashy on the track whom he had been dating for like 5 years. The visuals for the song were on another level, they had good chemistry on set and that made the video really likeable.

They were not seen together for some time that and people started talking about them breaking up.

Cashy went mute but later came out and said that she left because the relationship was abusive and she was being financially manipulated.

Khaligraph and Cashy are both musicians, music also has a business side. When you are working with your partner sometimes you choose to handle your finances yourselves rather than getting a professional to do it.

Involving emotions in finances is a bad move, yes it’s your money but sometimes you feel that your man or woman underpaid you.

In a relationship, everyone knows what they are bringing to the table and when they feel their efforts were not given enough compensation it can lead to a lot of fights and arguments. However much you love each other when it comes to business just hire a professional to handle your money.

Men tend to be very possessive especially of their women, they have a picture in mind of how you should live now that you are with him.

After Cashy talked of being abused, Khaligraph then responded saying he is a family man and that if he commits to one girl he will roll with only her.

He even went ahead to say Cashy does what he tells her to do. Trying to own your girlfriend will only make her feel less valued, we own properties, not people.

She broke up with the rapper because she felt devalued by how Khaligraph was trying to handle her.

Frankie Kiarie and Maureen Waititu were serving us with couple goals for the better part of last year.

The cute pictures and cuddly videos led people to think the two would never part ways. Frankie is a gym instructor and Maureen is a vlogger, these two really complimented each other.

They had a YouTube channel where they would post their work out routines together. Whoever said familiarity breeds contempt was not wrong; Men are visual creatures and when they keep seeing something around for some time they get bored.

Don’t get me wrong though, I am not trying to justify anything here iris what iris. I guess Frankie got bored and had to look for excitement elsewhere.

Maureen accused him of hooking up with the curvy lawyer Corazon Kwamboka when they were still dating.

If you are working together as a couple, find a way to give each other some bit of space to be creative individually. Space works wonders and who knows? Maybe it could have saved Maureen’s and Frankie’s relationship.

When a couple who work together break up, it’s not always about the money, sometimes things don’t actually work out.

Natalie Tewa and her Ugandan bae Moses Rnaze were the cutest things on the internet. The vlogger couple woed fans with their pictures and travel videos.

Rnaze went to Uganda for a few days and when he returned he discovered that Natalie had cheated on him. We can’t blame her though we all love some thrill in our lives.

Rnaze broke up with her and Natalie in her defence responded, ‘’I actually have to speak about this emotional and physical abuse that has been going on’’.

I admire couples who work together, doubling the size of the bag is not bad. Sometimes though you are not just meant to be together.

Little things will trigger fights and lead to nasty breakups. Most women always complain of physical and emotional abuse after breakups, people out here chose to stay in an abusive relationship hoping it will change.

If you are dating someone and you feel like you are not getting as much as you are giving, walk!