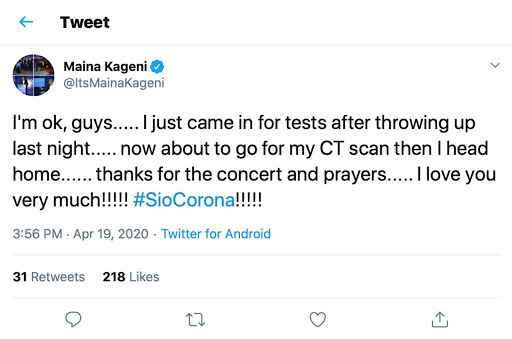 Classic 105 breakfast presenter Maina Kageni has denied being admitted to any hospital.

"I have just come from seeing a doctor. I was not feeling well yesterday i was vomiting and running a fever. I went in, tests were run, I was treated and discharged."

The interwebs went wild after news of Maina's health was revealed by colleague and fellow radio personality Mike Mondo during an Instagram Live session with Kiss FM’s Kamene Goro on Sunday afternoon.

Mike told his over 300 live audience members that he will be standing in for Maina next week because he is unwell.

Mike has clarified the claims saying he was misquoted.

"It is wrong and irresponsible to put out such news. Maina is okay."

"I'm simply covering for Maina in the next week. That is it."